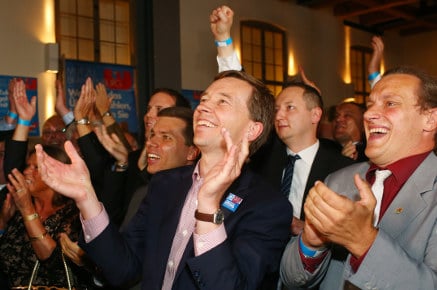 Researchers at the Friedrich Ebert Foundation (FES) in Berlin found that behind growing scepticism towards the euro, support is growing for concepts more readily associated with the right wing.

In a survey of 1,915 people between the ages of 16 and 95, some 36 percent of respondents believed that Germans should be more assertive about their national pride.

More than 10 percent said Hitler’s dictatorship also had good aspects, while 11 percent agreed with the statement: “We should have a Führer who will govern Germany with a strong hand for the benefit of all.”

"There are no grounds to panic," Dr Ralf Melzer, the publisher of the report and the foundation's leading expert on right-wing extremism, told The Local. "It's a mixed picture of good news and bad news."
In some areas right-wing attitudes are receding, especially in the former East Germany.
But in others the study showed "a shift towards more subtle forms", including growing scepticism towards Islam's place in Germany, the plight of refugees and asylum seekers.
Forty-two percent of respondents also believed that most asylum seekers arriving in Germany were not persecuted in their homeland.
Anti-Semitism on the rise
The study, titled "The fragile middle – hostile conditions", was conducted between June and September across the country.
Among the observed "ups and downs" compared to earlier studies, Melzer noted a pronounced drop in sympathy towards Jews in recent months. While classical anti-Semitism has decreased compared to 2004, it grew again after summer violence in Gaza.
Eighteen percent of respondents said that because of their behaviour, Jews are partially responsible for their persecution. And 15 percent felt Jews had too much influence in Germany.
Half of respondents said they are tired of hearing “about the German crimes against the Jews again and again”.
Support is also growing for aspects of ‘social Darwinism’, where migrants and the unemployed are regarded as a societal burden to be left to fend for themselves.
'Not my problem'
But as much as anything, the results showed colliding attitudes harboured by the same people.

While 87 percent of respondents saw a clear threat in right-wing extremism, 52 percent believed the issue had been blown out of proportion by the media. And 49 percent believe the best way to deal with it is to ignore the right-wing altogether.

This kind of thinking “opens the door to right-wing populism”, warned the study’s author, Andreas Zick.

People are still generally distanced from neo-Nazi groups like the National Socialist Party (NSP). But they are increasingly drawn to the euro-critical Alternative for Germany (AfD) party, which Melzer said was comparable to UKIP in Britain or the Danish People's Party, and "seek to mobilize populist potential".

Although the AfD denies advocating right-wing ideology, isolated outbursts don't help its image: In October, a party member said the gas chambers in Dachau had been built by the Allied occupation.

The party reportedly has 22,000 members, showing a fourfold increase in the past 18 months. By comparison, the country’s two leading parties the Social Democrats (SPD) and the Christian Democrats (CDU) have just under half a million members each.

While tolerance and multiculturalism became a cornerstone of post-war Germany, the shift in attitudes in recent years may partly have been fuelled by politicians' comments that all is not well, especially in matters of immigrant integration.

In 2010, Chancellor Angela Merkel caused a stir when she said attempts to build a multicultural society in Germany had "utterly failed".

The so-called "multikulti" concept, where people "live side-by-side" happily, did not work, Merkel said, adding that immigrants needed to do more to integrate – including learning German.

The comments came amid rising anti-immigration feeling in Germany. A Friedrich Ebert Foundation survey conducted that year suggested that more than 30 percent of Germans believed the country was "overrun by foreigners".

Meanwhile, perhaps mindful of the ground gained by the AfD, hard core neo-Nazi groups also started to drop the skinhead look and try to enter the mainstream with more reasoned argumentation than flailing fists and steel-capped boots.

With defter use of social media and opting for a more contemporary and less aggressive look, they have even been dubbed ‘Nipsters’, a fusion of neo-Nazi and Hipster.

Asked to name his greatest concerns based on the findings, Melzer said the "suppression mechanism" of the wider public was a worry, as evidenced by the 49 percent who advocated ignoring right-wing extremism.

If they recognize it, "they delegate this problem to the police or politicians," rather than taking a personal stance against it, he said.