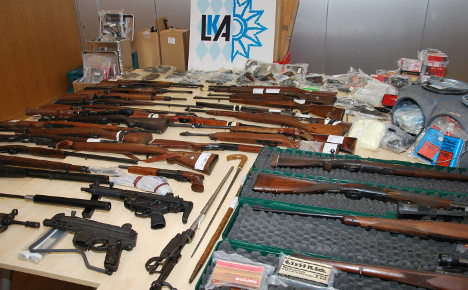 Weapons found by police in the bunker. Photo: DPA

The 59-year-old electrician had constructed the emergency shelter by expanding and reinforcing the basement of his family home in the small town near Regensburg in Bavaria.

Police said they had confiscated two submachine guns, 80 rifles, 60 handguns, 20,000 rounds of ammunition and 40 kilogrammes of materials to make explosives.

”We don't know when he started construction. He did it all by himself."

There is no evidence he is mentally ill or has extremist political views, police said, adding that the man was arrested on illegal weapons and explosives charges.

Police said they took three days to enter and explore the extensive survival shelter and weapons arsenal, using power tools to crack through the walls.