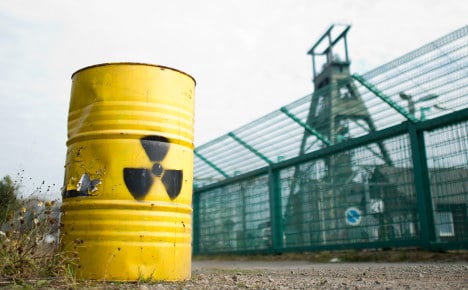 Some 600,000 cubic metres of waste will have to be placed in permanent underground storage instead of the anticipated 298,000 cubic metres, the Süddeutsche Zeitung (SZ) reported.

The newspaper was citing figures from a copy it obtained of the draft "National Disposal Plan" the government is currently negotiating with individual federal states.

The new projection is significantly higher because of the inclusion for the first time of 13,000 tons of waste from uranium enrichment, equivalent to around 100,000 cubic metres .

The waste comes from a uranium enrichment plant at Gronau, near the Dutch border in North Rhine-Westphalia.

Since the so-called uranium tails can be processed into nuclear fuel, the waste was previously excluded from the calculations for the overall total.

Another 200,000 cubic metres of waste accumulated during the clearance of the Asse II shaft in Wolfenbüttel in Lower Saxony. Low- and medium-level nuclear waste was stored in the former salt mine from 1967 to 1978 at a depth of 750 metres.

Because of increasing seepage of groundwater into the shaft, the site's 126,000 drums must now be removed and their contents repacked in new containers and disposed of afresh.

The Green Party welcomed the government's "honest inclusion" of the 100,000 cubic metres of waste from uranium enrichment. But the party's nuclear policy expert Sylvia Kotting-Uhl stressed to the SZ that enrichment work was still going on, arguing that it should be stopped.

Radioactive skeletons in the cupboard

"It's not so much a step forward as simply shocking how the public was duped in the past," Susanne Neubronner, a nuclear policy expert with Greenpeace, told The Local.
Moreover, the revision of the figures could just the start as more "skeletons in the cupboard" of sloppy waste handling over the decades are admitted or come to light.
Energy companies are known in cases to have "packed the waste away and shut their eyes to it",  Neubronner added. "Now is the time for companies to come clean about stored waste."
Greenpeace was aware of the existence of 2,000 rusting and dilapidated barrels of radiocative waste that were stored underground and potentially pose a danger.
Still waiting for the dump site
The new designated storage site for the bulk of Germany's radioactive waste is the Konrad pit, an old iron ore mine located in Lower Saxony that is being converted for radioactive waste storage.
Now two decades past deadline, Konrad will be used to store waste that generates less heat, according to the draft disposal plan.
The government is due to locate and open a second storage site by 2031 at the earliest for almost 300 barrels of waste that generates more heat.
It is also not ruled out that the 'extra' 300,000 cubic metres of waste to be disposed of may go into an extension of the Konrad pit. But a decision on this will only be made in 2022, the earliest the delayed site is expected to open.

Germany's nuclear waste management was complicated further when environmental authorities in Schleswig-Holstein announced last month that a third of barrels containing radioactive waste at a decommissioned nuclear plant are damaged.

Vattenfall, the energy company which manages the Brunsbüttel site, reported that 102 of the 335 barrels stored underground here were corroded, leaking or had loose lids. Some containers are so deformed that they can no longer be moved.

The Brunsbüttel site holds 631 barrels of waste in its six chambers, which have been used for this purpose since 1979. The nuclear power plant was decommissioned in 2011.

Almost 200 nuclear power stations are due to be decomissioned worldwide by 2040, prompting expert warnings of similar problems in other countries where there are few facilities for disposing of the resultant radioactive waste.