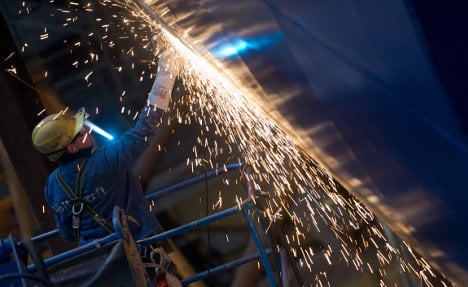 "Further deterioration in economic expectations and the stagnation of new orders point to a rather sluggish course of economic development in Germany until at least the end of 2014," the Bundesbank wrote in its latest monthly report.

And there is little sign that Europe's economic engine will gain traction in the coming months. "No marked recovery in important euro-area partner countries has yet materialized," the report stated.

"In the light of increased global risks together with uncertainty about the implications of some economic policy measures, there may be a delay before the recovery in corporate investment resumes," it said.

On the positive side, the German economy would benefit from the euro's decline against the dollar, falling oil prices and robust consumer spending thanks to a strong labour market, the Bundesbank said.

The government and leading economic think-tanks have recently downgraded their growth forecasts for Germany recently.

The weak outlook was confirmed by the Institute for the German Economy (IW) in Cologne, whose autumn survey of business sentiment was published on Monday.

Just 24 percent of firms expected to increase their exports in 2015, compared with 34 percent in spring.

Berlin is currently pencilling in growth of 1.2 percent for 2014 and both the top German institutes and the International Monetary Fund are forecasting 1.3 percent growth.