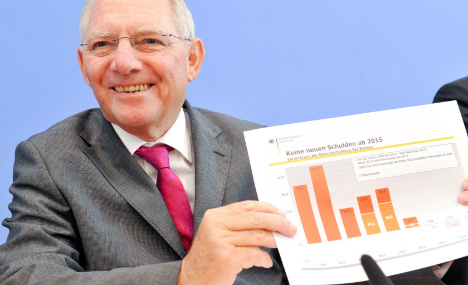 Wolfgang Schäuble, Germany's Finance Minister from Angela Merkel's ruling Christian Democrats (CDU), can rest easy that he has delivered on his 2013 promise of "no new debt from 2015."

But economic news released hours after the agreement of the "Black Zero" budget on Friday may have made the celebration premature.

Data from the federal statistics office Destatis showed that gross domestic product (GDP) expanded by 0.1 percent between July and September, after shrinking by 0.1 percent in the preceding three months.

Originally, the contraction in the second quarter had been reported as 0.2 percent. Recession is technically defined as two consecutive quarters of falling GDP.

Before Friday's announcement, the in-the-black budget hinged on closing a €4.5 billion gap, but due to dropping interest rates, data from the Green party showed that scheduled interest payments have fallen to €1.33 billion.

There is also a rebate from Brussels expected to come in around €2.2 billion.

"There is still lots of work to be done," said Greens expert Sven-Christian Kindler. "There is a lot of luck in there, and good marketing."

Programmes that the Grand Coalition government between the CDU and their ruling partners, the Social Democrats (SPD) reduced to balance the budget included housing benefits.

However, accounts for internal security, humanitarian aid, transportation, culture and flood protection were shored up for the coming year.

Victims of a debt-free year include infrastructure, social funds and taxpayers who will have to sit tight before seeing any relief.

This is not the first time Germany has set out to create no new debt. In 2006, Hans Echel promised a budget without any fresh borrowing, but failed to find support within his own SPD party. Peer Steinbruck also set out to do the same, but the global financial crisis of 2008 made it difficult.

The highest debt ever created in the German parliament was by 1996's Theo Waigel. That year, €40 billion in new debts was taken on.