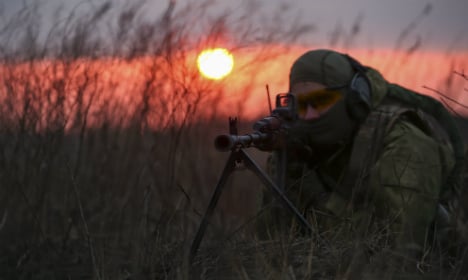 A Ukrainian serviceman from an anti-terrorist unit during a training session. Photo: DPA

Steinmeier said there were signs, supported by Organization for Security and Cooperation in Europe (OSCE) monitors, of "new movements that indicate that the separatists are preparing for major violent confrontations"

"It makes no sense in this situation in the region to re-arm and to prepare for further military confrontations," he said, speaking at a joint press conference with his Hungarian counterpart Peter Szijjarto.

"This helps no-one, and we're losing time – time we urgently need for the political and especially the economic stabilisation of Ukraine," added Steinmeier. "To now fall back into a military confrontation would harm everyone."

Ukraine said earlier it was readying for fresh combat in the east, fuelling fears of a return to all-out conflict despite a two-month-old ceasefire deal that has halted fighting along much of the frontline.

Szijjarto, asked whether Hungary was moving diplomatically too close to Russia, said that while Budapest seeks "healthy" ties with Moscow, it agrees on the need for European unity in face of the crisis.

"Hungary seeks balanced, healthy and pragmatic relations and cooperation with Russia… I think that's the same for all of Europe," he said, according to a German translation.

"At the same time it is obvious that a violation of international law is unacceptable for us and that if someone openly violates international law the the European Union must act jointly and close ranks on this matter."