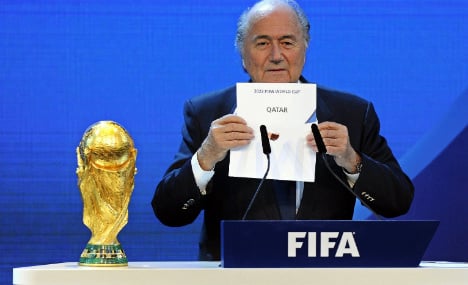 Sepp Blatter announces Qatar's winning bid in 2010. Photo: DPA
The BBC reported that Garcia released his statement just four hours after the report had been released by Ethics Committee chief, German judge Hans-Joachim Eckert.
Eckert, had acquitted future hosts Russia and Qatar of all serious corruption charges.
Now Garcia, a former US federal prosecutor, says he will appeal to FIFA to look again at the allegations.
“Today’s decision by the Chairman of the Adjudicatory Chamber contains numerous materially incomplete and erroneous representations of the facts and conclusions detailed in the Investigatory Chamber’s report,” Garcia said.
The report, compiled by Eckert but based on Garcia's inquiries, said there was evidence of some corruption, but no bidding country would be sanctioned in the wake of the 18-month investigation, conducted at a cost of nearly €8 million according to The Independent.

The finding meant the games were to go ahead as planned and without re-votes for hosts of the 2018 and 2022 games.

Eckert's 42-page paper stated that any rules broken by the successful bidders were "of very limited scope".

"FIFA looks forward to continuing the preparations for Russia 2018 and Qatar 2022, which are already well underway," said a FIFA statement released in response.

In the 2010 vote to determine both hosts, Russia beat out competing bids from England, as well as joint bids from the Netherlands/Belgium and Spain/Portugal.  Qatar won over bids from the USA, South Korea, Japan and Australia.

The report also noted that the Russian bid committee "made only a limited amount of documents available for review, which was explained by the fact that the computers used at the time by the Russia Bid Committee had been leased and then returned to their owner after the Bidding Process." The computers in question have since been destroyed.

The Russian committee said that requests to Google for the emails went unanswered.

The ethics committee also noted in its report it has no subpoena power and is reliant on all parties to turn over documents of their own free will.

Hammam was banned from all football-related activity for life in 2011 and 2012 after attempting to buy votes in his effort to become Fifa president.

The report also chastised the English Football Association over its failed 2018 bid, saying its attempts to woo the vote of the Trinidad and Tobago executive member damaged "the image of Fifa and the bidding process."

Both Russia and Qatar have faced criticisms for their human rights violations.

Eckert had previously announced that the full report into the investigation would not be made public.