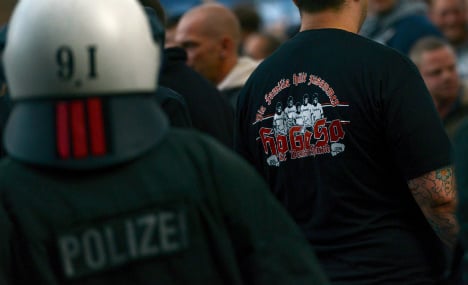 The decision overturns a police ban on the protest out of fears that the demonstration could devolve into violence like the "Hooligans against Salifists" protest on October 26th in Cologne.

Authorities can still appeal Thursday's decision to a higher court in Lüneburg.

However, the Hanover court did place restrictions on the protest planned for November 15th in its decision. Demonstrators are only allowed to gather in one place and may not walk through the city. Up to 5,000 people are expected to attend.

Eighteen counter-demonstrations have also been planned the same day.

Similar protests were also planned to take place on Saturday in Berlin and Hamburg, but the latter was cancelled by the hooligans themselves while the Berlin protest registration turned out to be a falsified document.

Almost 5,000 people attended the Cologne protest, organized by Hooligans Against Salafists (HoGeSa), which resulted in 49 police officers being injured and the city centre being locked down for hours. HoGeSa is an initiator of the Hanover protest, along with an unnamed person from North Rhine-Westphalia.