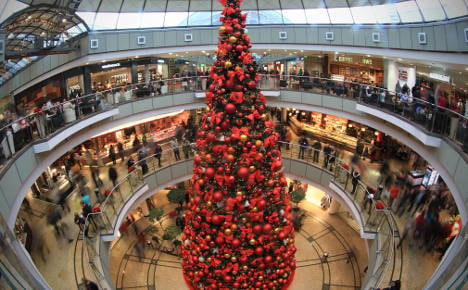 The retail industry federation HDE raised its growth forecast for the whole of this year to 1.8 percent from 1.5 percent previously.

"The general economic conditions are right," said HDE president Josef Sanktjohanser. "The stable situation on the labour market is putting consumers in a good mood."

The key Christmas season was expected to see growth of 1.2 percent over sales in the year-earlier period, or an additional €85 billion in sales.

According to HDE's consumer poll, consumers expect to spend an average €447 on Christmas presents this year, €50 euros more than last year.

Sanktjohanser said that while the lull Europe's biggest economy is currently going through was souring the investment climate it was not yet was not hitting consumers.

"Private consumption is continuing to prop up the economy," Sanktjohanser said.

Later this week will see the release of German gross domestic product (GDP) data for the third quarter.

Following a contraction in the second quarter, another drop in GDP in the period from July to September would put Germany in a technical recession, but most economists and observers believe the economy will grow, albeit by a minimal 0.1 percent.

The upgraded forecast comes after  recent figures  showed German shoppers cut back on spending in September at the fastest rate for seven years.

However, recent polls have suggested consumer sentiment recovered in October following a decline brought on by geopolitical tensions and slow economic growth as a result.