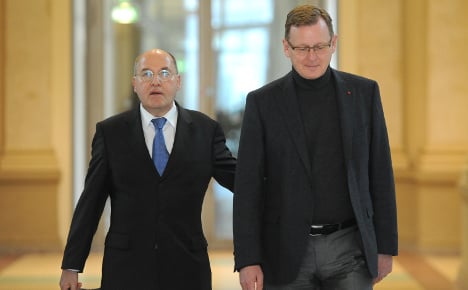 The former Communist regime had been one “where political caprice could replace law and justice at any time, where tens of thousands of lives were broken and destroyed by state injustice,” they said.

“Today we renew our apology for the past injustice and our recognition that we must guard democracy and the rule of law jealously.”

But they said that a “black and white” picture of the former German Democratic Republic (GDR) was unfair to its former inhabitants, and that many of those same people were still waiting for “recognition” of what they achieved in their payslips and pension packets.

The party was responding to harsh criticism from singer Wolf Biermann, who was invited to speak at the German parliament's commemorations for the fall of the Berlin Wall on Friday.

To Biermann, calling the Linke his “loyal old enemies” was almost affectionate compared with the tirade he then launched into.

He proceeded to call them “rotting vermin”, “dragon spawn” and the “squalid remains of what was happily overcome” – namely, the former SED regime.

“I clapped spontaneously,” she said, “but in fact it's different and much worse. 25 years after the Peaceful Revolution the successors of the SED might rule a whole state.

“The Linke is more than the miserable remains of the GDR state party, it's not beaten yet. I find that sad.”

Wanka is a Christian Democratic Union (CDU) politician who grew up in the GDR.

She accused Bodo Ramelow, the Linke politician from the West who now stands to become president of Thuringia, and his fellow party members of artificially keeping the hated SED alive.

“They could have started a new communist party, that would have been legitimate,” she said.

Thousands of people, apparently sharing Biermann and Wanka's disgust at the prospect of the Linke ruling Thuringia, took to the streets in Erfurt on Sunday to protest against Social Democratic Party (SPD) and Green support for Ramelow.

They carried candles in an explicit reference to the 1989 Monday demonstrations that finally proved too much for the SED regime to handle.

“We want to make it clear that the people of Thuringia really don't want this,” one man told broadcaster MDR. The demonstration was just the latest in a string of protest actions against the 'red-red-green' coalition plans.

The most extreme have gone as far as attacks on the cars and online threats against Linke state legislators and a town mayor.

Despite the opposition, the fact remains that the Linke and its prospective coalition partners are the only combined force that could build a government in the state.

Voters put the Linke, SPD and Greens into this situation in September by making them the three biggest parties behind the CDU.

And the SPD was so keen to avoid the impression that it was doing dirty deals behind voters' backs that it held a second poll of its own supporters on whether the coalition negotiations should go ahead.

There seems little hope of resolving the tension between the popular resistance and what in any other circumstances would be the legitimate outcome of the democratic process.

It seems that to many Germans, the Linke is so irreparably tarnished by its embrace of the status of heir to the SED that any government in which they are involved would be unacceptable.

The fine art of the non-apology

A good place to start thinking about why that is would be the sharply political focus of Sunday's apology.

The party could have restricted its remarks to the crimes of the past, but instead tried as well to portray itself as the only legitimate representative of people in the eastern states who it says are getting a bad deal 25 years on.

Laying claim to the people the SED once governed in this way could not help but stick in many people's throats on the day they celebrated freeing themselves of the GDR.

It echoes Gysi's previous dismissals of calls for his party to apologise with references to the SED's apology of December 1989.

In that text, the party excused itself only for the fact “that the previous leadership of the SED led our country into this crisis that endangers its existence.”

There was no mention of the thousands killed at the border and the Berlin Wall, the thousands of lives blighted by years in political prisons, the people unjustly executed, children removed from their families, and a thousand other crimes.

Linke leaders may, 25 years on, finally have gestured, grudgingly, to the ways their predecessors at the helm of the SED abused their power over those in the former East Germany.

But their choice of words and the very fact that they do not completely reject the heritage of the past will forever put them beyond the pale for many Germans.