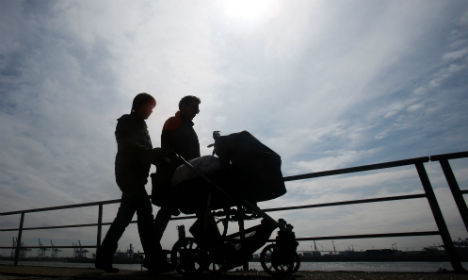 "With this, we're strengthening the backs of all young parents who want to be there together for their children," Manuela Schwesig, Families Minister, said on Friday in parliament while announcing that Elterngeld Plus will be available as of July 1, 2015.

Currently, parents are entitled to a combined 14 months of paid parental leave, with neither parent taking less than two months or more than 12 months. Single parents with sole custody are able to take the whole 14 months for themselves.

Elterngeld Plus is designed to supplement income for parents who would like to cut down on their working hours, but not leave work altogether. With it, parents can claim only half the monthly amount they would get on full parental leave, but for 24 months, twice the time period of the existing model. If both parents reduce their hours to 25 to 30 hours a week, they receive benefits for an extra four months.

The option of receiving Elterngeld as it currently exists will also remain. The Elterngeld Plus is the Families Ministry's way of creating options for working parents. Parents can choose one or the other, or a combination of the two.

And while Schwesig hails this as a way for women to rid themselves of their Hausfrau smocks while simultaneously encouraging fathers to spend more time with their children during their first years, critics say the new parental leave pay doesn't go far enough.

"Mrs. Schwesig's Elterngeld Plus only goes half way to giving parents true freedom of choice," Green party family policy speaker Franziska Brantner told the Berliner Zeitung. "It finally makes part-time work an option, but it doesn't distinguish between reducing your working hours by half or a single hour a day."

The National Association of Single Mothers and Fathers says that the extra four month bonus should also be applicable to the increasing number of single-parent households in Germany.

They also argue that demanding that parents work 25 to 30 hours a week to count as part-time unfairly excludes the population they represent, as the average single parent works 7.8 hours a week during the first three years of a child's life.

Christina Raab of the National Association of German Employers say that small businesses will also suffer under the expansion of parental leave pay options as it's already difficult to replace a parent who takes leave.