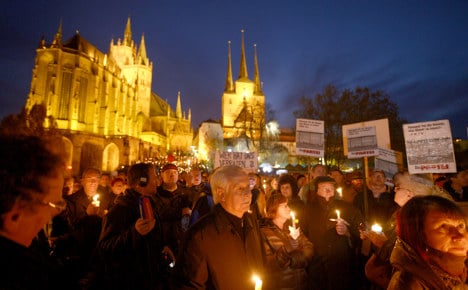 Many of the demonstrators carried candles in their hands in a gesture towards the 1989 demonstrations against the East German State, which ultimately led to the fall of the Berlin Wall.

The demonstration followed the agreement by Social Democrats (SPD) and Greens in Thuringia last week to enter negotiations with the Left party to form a “red-red-green” state government in the state parliament following elections in September.

The plans are controversial as many see the Left party as a successor to the Socialist Unity Party (SED) that governed East Germany.

Some demonstrators sang the German national anthem and others carried the Thuringia state banner.

Others carried signs accusing the SPD of "betrayal" for agreeing to work with the Linke. Clarsen Ratz, a representative of Christian Democratic Union (CDU) supporters among small businesses, was the first to call for a demonstration and had initially only expected 600 people to take part.

The CDU had been in government in Thuringia for 24 years prior to last month's vote.

Coalition negotiations between the Left, Social Democratic Party and Greens are expected to last all month and result in Left leader Bodo Ramelow being installed as state president on December 5th.