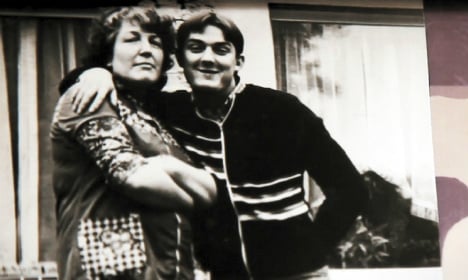 Michael Bittner, pictured with his mother, was shot dead at the East German border in 1986. His family didn't receive official confirmation of his death until 1991. Photo: DPA

Monika Behrent was hidden in a removals truck with her three children and another woman for an escape attempt across the inner German border.

It was 1972 and her West German husband had prepared everything so they could start a new life. They just needed to get across.

“It would have worked if we hadn’t been betrayed,” Behrent, 74, told The Local. Acting on a tip-off, the Stasi security service arrested them at the border in Bavaria.

She served 16 months of a three-year jail sentence, her husband was sentenced to five years and their children aged four to 14 were sent to a care home.

Behrent learned they were turned in by none other than the fiancé of the second woman, “because he wanted to cut a deal with the Stasi to ensure that she got out”.

So five lives were effectively traded as insurance for one person. Behrent ran into the man on the street a few years later and in 1990 tried unsuccessfully to have him prosecuted.

“Sixteen months imprisonment and my children sent to a home. That is a theft of our lives,” she said.

Like many victims of the old regime, Behrent finds it therapeutic to work with Berlin Wall commemorative projects, including TEA, a small archive of diaries and memoirs located in an eastern suburb of Berlin.

“You have to speak about it,” she said. “But when you do, it all wells up in you again.”

These detail intrusions and excesses by the regime, but also daily life where people led a relatively secure and untroubled existence – provided they didn’t step out of line.

In the next 20 years this post-war generation will largely pass on and leave a gap in the collective memory, says Manke.

The following generation is not inclined to delve into the past in the same way, despite having experienced some of it themselves.

“My own children say ‘Can you just leave your wretched GDR alone now?’,” says Manke, who is originally from East Germany.

Meanwhile, people like Irmgard Bittner feel their pain is being brushed aside in the hurry to heal wounds of the past.

“You see on TV and read in the papers how things get played down, swept under the carpet,” says Bittner, whose 27-year-old son Michael was shot dead  at the border in 1986.

She never received his ashes after the authorities hastily cremated his body. There was no official confirmation that he was even dead until 1991, and the death certificate and autopsy findings were destroyed by the Stasi.

Hers is an extreme case. But generally it was a “Stasi principle” to leave the relatives in as much uncertainty as possible, said Dr Maria Nooke, deputy head of the Berlin Wall Memorial Centre. “There is no end to the pain of these people.”

At least 138 people were killed while trying to escape from East Berlin, and another 872 died on the inner German border.

Relatives of escapees could be ostracized by the system, pushed out of work and stripped of social benefits. Worst of all, many were deliberately fed a grotesque version of events when someone was killed.

“It’s barbaric,” says Bittner, who was falsely told that her son had been involved in human trafficking.

This was one of several known instances around 1986 where documents and photos pertaining to victims were forged in a mysterious additional cover-up.

“I can’t explain it, we never found out why,” said Bernhard Jahntz, a former senior public prosecutor who was involved in cases against GDR officials, including East German leader Erich Honecker and his successor Egon Krenz.

At the bottom of the command chain, guards who killed escapees were usually given suspended jail sentences in trials that ensued from 1990.

Almost 30 years on, Bittner still knows only that her son was hit by bullets in the liver and heart as he was climbing a ladder on the last barrier, and that he bled out without regaining consciousness.

Some details came from surviving Stasi documentation, others from an anonymous letter from a former guard who claimed he was present at the scene.

The full story and the location of his ashes rests with those who handled his case and body, but they aren’t talking.

“Someone needs to come forward and say where the remains are,” says Nooke. “No one has had the courage.”

Old guard still among us

Many of those who suffered under the East German system are also still scared to speak up.

“Some still live near the perpetrators,” says filmmaker Stefan Weinert, whose documentary Die Familie (The Family), looks at the impact of deaths on Wall victims’ relatives.

“If you go into some town halls they are mainly staffed by people aged 50 and over who were very loyal to the state and system and were never replaced.”

In 2011, Wolfgang Engels, who was shot twice while escaping from East Berlin in 1963, took part in a protest over awards conferred on a former university professor who had been revealed as an ex-Stasi informer.

He was shocked when elderly colleagues of the academic came up and hissed at him, “The Stasi should have taken better aim that night.”

“That these people are still around us 50 years later and cling to their old beliefs shook me more than what happened in 1963,” said Engels, 71.

Many GDR officials went on to enjoy successful careers in reunified Germany, despite their compromised past.

Ex-Stasi officials managed to secure pension increases to reflect their old salaries, and former senior officers published their own controversial memoirs that paint a friendlier image of the organization.

Meanwhile, some western German partners of the TEA archive refuse to travel to former GDR territory for meetings – even from west to east Berlin.
Lingering prejudice towards ‘Ossies’ (East Germans) may account for some of the reluctance, says archive director Manke.
But the root cause is simpler, she believes: Even though the Stasi was disbanded and Germany is one again, “they are still afraid.”
And even years after reunification, blood was still being shed in the hangover from the 40-year divide.
In 1998, the body of former West German border guard Hans Plüschke was discovered near his vehicle on a central German motorway. It was a few kilometres from the spot where, 36 years earlier, Plüschke had killed a GDR captain during an exchange of fire on the frontier.
Like that guard, he was fatally shot through the right eye. No one was ever charged with his murder.