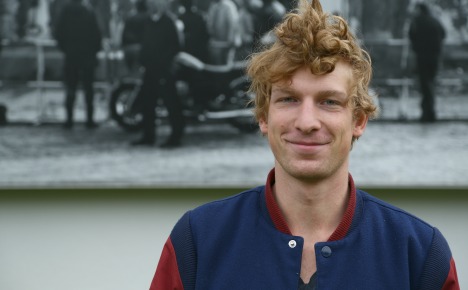 Franz Hildebrandt-Harangozó never knew the Berlin Wall. The 23-year-old grew up in a united Berlin, now 25 years clear of the Wall's shadow.

But his youth should not be mistaken for ignorance. "I know the Wall through the history of my family," says Hildebrandt-Harangozó, lying, care-free, on the grass that lines the Berlin Wall memorial trail at Bernauer Strasse.

Hildebrandt-Harangozó and two friends are out playing frisbee with their dog, mere steps from where his grandparents' home once stood at number 2 Bernauer Strasse. "The street was their playground," he says.

"They grew up here, they met here and they moved in together here. Then the Wall got built directly on their childhood memories and their lives."

When the barriers went up around West Berlin and through the heart of the city in August 1961, the houses on Bernauer Strasse became part of the Wall.

"Their world got split in two," says Hildebrandt-Harangozó, whose grandparents had family and friends on both sides. "It's ridiculous, but if they looked out the window, their heads were in the West and their butts were in East Berlin."

Before long the windows and doorways of the house were bricked up. Demolition followed soon after.

The foundations of Regine and Jörg Hildebrandt's former home are now part of the Wall memorial.

Like some family members who lived in East Berlin, the Hildebrandts had their chance to escape, but they decided to stay.

"Our whole world revolved around the east side of Bernauer Strasse,” says Jörg Hildebrandt. “My father was a priest at the Church of Reconciliation they demolished and most of our family was on that side."

Still, the pressure was constant.

The publicly released files the Stasi kept on millions of people they were monitoring were particularly chilling. Regine Hildebrandt was a hobby bird watcher and the files showed that agents would follow her to the countryside, what they considered "the border zone".

"It sounds like CIA stuff, but they were really just watching birds," says Hildebrandt-Harangozó.

"'We have three subjects with binoculars. They're watching the West'," he says, recalling a passage from the files.

"It's ridiculous, but I also think it's scary to see that someone documented your life."

A birthday to remember

The night of Thursday, November 9, 1989, Franz's uncle Jan was home. Up in his room with his sister and a friend, he sat listening to the radio, frustrated that his 18th birthday party had ended so early, at 8 p.m.

It ought to have been a much bigger celebration, he thought, marking his entry into adulthood and independence.

Around 10 p.m. the news started to come over the airwaves: the Wall was open. The family went to the Bornholmer Strasse bridge to see if it was really happening.

"There were thousands of people," recalls Jan Hildebrandt, now 44. But within 15 minutes they were through.

"No one knew each other, but people were crying and hugging and the West Berliners came to greet us on the bridge. It was a party."

They called their family in West Berlin and spent the rest of the night touring the city's landmarks. "It was the first time in my life I saw Kurfürstendamm, the Siegessäule [victory column] and the Brandenburg Gate from the other side," says Hildebrandt.

It's now his job to criss-cross the city as a paramedic. "Every day, if I cross now from east to west, I remember that night."

Hildebrandt-Harangozó's grandmother Regine was a chemist in East Berlin, but became active in German politics after the Wall came down.

"She was famous for listening to both sides and trying to bring one nation back together," says Hildebrandt-Harangozó. "And that's what she is still respected for today," he says, noting that people still tell him how much they admired his grandmother.

Regine Hildebrandt received the Order of Merit of the Federal Republic of Germany in 2001 for her work supporting the disadvantaged in Brandenburg and supporting reunification. She died later that year of breast cancer.

Hildebrandt-Harangozó's grandfather Jörg, a retired journalist, has written about his wife and carries on her legacy, telling her story and remaining active in organizations that preserve and promote the history of East Germany.

'Poor but sexy' vs. gentrification

Though it's been 25 years, Hildebrandt-Harangozó says he can still see the differences the Wall created.

"I feel it's the eastern part that makes Berlin cool today," he says. "It's the 'poor but sexy' thing, the multi-cultural thing," referring to outgoing mayor Klaus Wowereit's famous description of Berlin.

"In East Berlin individualism is celebrated and easterners are more open and rough around the edges," says Hildebrandt-Harangozó.

"Westerners are still nice, but more conservative. They don't think poor is sexy."

Though reunification has taken a generation to deliver relative economic parity to east and west, young people today are increasingly satisfied with the results.

In October, a survey by NEON magazine of Germans 18-35 years old found that almost half believe reunification has been successful, compared to only 14 percent in 2005.

The survey also found that only 14 percent believe there are stark differences between east and west, compared to nearly one third in 2005.

"It's a safe city with good living quality, but at the same time you have this eastern influence so it's still cheap and you can do whatever you want," says Hildebrandt-Harangozó.

But the cost of living is going up.

"What I fear a little bit is gentrification," says Hildebrandt-Harangozó. "It's a popular city now and I'm scared that Berlin will be the London of tomorrow: way more expensive, still kind of cool, but too big. Right now it's both, that's the nice mix."

For now, knowing where he came from, Hildebrandt-Harangozó is happy to stay right where he is.

"It's just nice that the back story of my family is visualized as a memorial and I live right next to it."

BERLIN WALL
‘Wall of Shame’: How the Berlin Wall went up 60 years ago
Url copied to clipboard!