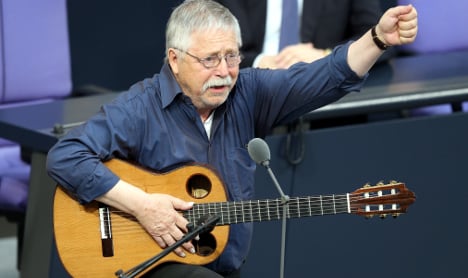 Singer Wolf Biermann in parliament on Friday morning. Photo:DPA
Singer-songwriter Wolf Biermann, who left he East German communist regime in 1976 when he was stripped of his citizenship, was given the rare honour of playing to the parliament.
But the former East German dissident used the occasion to lay into the far-left party, Die Linke, sparking applause from some politicians and outrage from the left.
Die Linke was formed out of the communist party (SED) which ruled over East Germany (the GDR) with an iron fist.
Their recent electoral success in the eastern state of Thuringia prompted an intervention from Germany's president.
Biermann, 77, described Die Linke politicians as "dragon spawn" and "the miserable remnant of what was fortunately overcome".
He described himself as a "dragon slayer".

Speaker of the house Norbert Lammert warned Biermann he was overstepping the mark.
But Die Linke's parliamentary leader, Gregor Gysi, ignored Biermann's attacks in his speech. He instead focused on the failures of German reunification. He stressed the GDR was a dictatorship and there had been injustices, but claimed that injustice was not the default state of the socialist country.
The Greens' parliamentary leader, Katrin Göring-Eckardt, described the GDR as an "unjust state" in her speech.