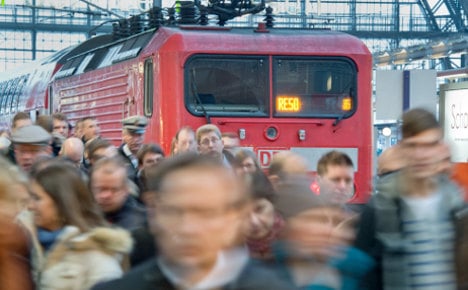 Rail operator Deutsche Bahn (DB) said on Thursday morning it had filed an application at Frankfurt am Main Labour Court for a preliminary injunction to end the strike.

The court will decide on Thursday whether or not to grant the injunction which questions the proportionality of train drivers' union GDL of calling a 98-hour strike.

DB said earlier its passenger services were "thinned out but stable“ on Thursday morning after the start of the longest walkout in history by train drivers.

The rail operator added that there was “massive inconvenience“ for travellers and commuters because of the walkout by GDL over pay, hours and union representation.

Around 30 percent of trains were running in western and northern Germany, the rail operator said, while 40 percent were still to timetable in southern Germany.

In the East between 15 and 30 percent of trains are running as usual.

GDL itself emailed members on Thursday with details of the bus and other public transport options they could use to reach the DB headquarters at Berlin's Potsdamer Platz, Welt reported.

GALLERY: The rail strike in pictures

S-Bahn lines in Munich, Nuremberg, Stuttgart and around Frankfurt are running an hourly service, while in Berlin and Hamburg some lines have departures every 20 minutes. The strike on passenger services began at 2am and will last until Monday at 4am.

A strike on rail freight services began at 3pm on Wednesday and that could begin to affect fuel deliveries to gas stations by the weekend, according to the logistics industry.

Gunnar Gburek, from the German Association of Materials and Logistics, told broadcaster MDR on Thursday morning the fuel supply could suffer by Sunday or Monday.

"There will definitely be bottlenecks in my view, especially as it (the strike) coincides with more drivers on the roads."

In some sectors of the economy there would "definitely be production losses", he added.

And motorists were already feeling the knock-on effects of the strike. There was reportedly a total of 350 kilometres of traffic jams on German motorways (Autobahns) on Monday morning.

SEE ALSO: Ten ways to get around without trains

One clear winner of the strike is the coach industry whose prices have more than doubled on some routes.

Sixt took out an advert on Thursday labelling GDL's combative boss Claus Weselsky as their "employee of the month".

GDL is demanding a pay increase, a cut to working hours and the right to represent all train stuff in wage negotiations.

Passengers can get more information about DB's replacement timetable from their website.

The Local readers took to Twitter to tell us about their experience of the strike.

@TheLocalGermany DB has rescheduled us on a train leaving 4 hrs later than reserved from Amsterdam to Dortmund tomorrow. No seat guarantee.

@TheLocalGermany I'm working from home Luckily I have that option. Even if I could get to work there's no guarantee I'd make it back!