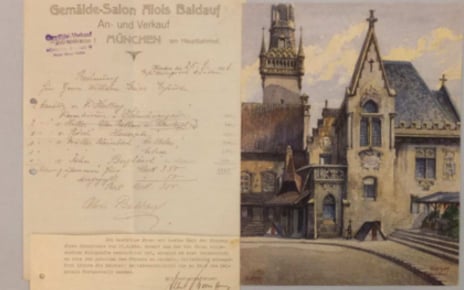 Two sisters from Hesse are selling the work at auction in Nuremberg on November 22nd, called the “The Old Town Hall”. It depicts a registrar's office in Munich and was completed by Adolf Hitler in 1914 or 1915.

Their grandfather bought the 22cm x 28cm painting from a gallery in the Bavarian capital in 1916 and the original bill of sale is included with the picture.

"We're expecting a four- or five-figure sale price," a spokesperson for the auction house said, adding that the sisters decided to auction the painting in Nuremberg as the memorial at the former Nazi festival compound there is currently being renovated.

The painting is well-travelled, as it was kept in Thuringia before being smuggled out of the GDR (former East Germany) to Hesse.

The lot also includes a certificate of its authenticity from Albert Bormann, brother of Hitler's later chief of staff Martin Bormann.

The Weidler auction house has already sold five Hitler paintings to collectors inside and outside Germany, the Nürnberger Zeitung reported.

The sisters say they will donate 10 percent of the sale price to a disabled children's charity. Around 800 works painted by Hitler still exist. They can be sold in Germany as long as they do not contain any Nazi symbols.

Hitler spent his early life in a failed attempt to make a living as an artist and was rejected by the Vienna Art Academy when he applied in 1907 and 1908.