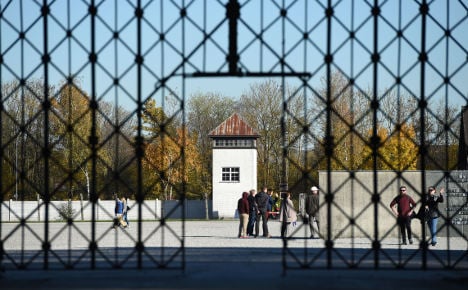 The Dachau entrance with the missing gate. Photo: DPA

Dachau police chief Thomas Rauscher said that his men were following up a possible neo-Nazi motive for the crime, but could not provide any concrete information on Monday about the perpetrators.

Germany's Jewish population was aghast at the pillaging of the gate, whose inscription “Arbeit macht frei” (Work will set you free) have become a symbol of the cruelty and cynicism of the Nazi regime.

Holocaust survivor and vice president of the International Dachau Committee Max Mannheimer said he was “horrified that Nazis apparently desecrated the memorial to those murdered here and violated the reverence due to such a place”. Gabriele Hermann, head of the Dachau memorial centre, said that the theft was a “deliberate, reprehensible attempt to deny and obliterate the memory of the crimes committed in this place”.

Around 800,000 people a year now visit the memorial site.

Dieter Graumann, president of the Central Council of Jews in Germany, told Bild that it was a “horrible and schocking” desecration.

"Whoever did this is either sick or evil. Probably both.”