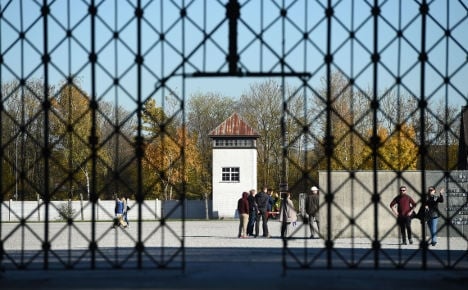 Jewish leaders have reacted with outrage over the theft of the iron gate, which bears the chilling inscription "Arbeit Macht Frei" (Work Will Set You Free), in a crime discovered early Sunday at the camp's memorial near Munich.

Merkel, who visited the Dachau Concentration Camp Memorial last year, was presented the prize, named for a former inmate of the death camp, in Berlin where she spoke of the importance of never forgetting the horrors of the Nazi regime and its victims.

"All the more appalling… are acts like the theft of the gate of this concentration camp memorial," she said.

"I hope that those who did that are caught quickly and held to account."

Police have said they are examining whether neo-Nazis were behind the theft but were open to all other possible leads.

Merkel said remembrance was a way to honour the victims but also helped to shape life today and in the future.

"Memory is inextricably linked to us constantly and decisively opposing any form of extremism, anti-Semitism and racism, and campaigning for human rights, for peace, for freedom, for freedom of opinion," she said.

Merkel was awarded the General Andre Delpech Prize by an association of former prisoners at the Dachau camp.

The French-born former Resistance member was deported on a train to Dachau in 1944, according to the Dachau camp memorial website.

During World War II it became a death camp where more than 41,000 Jews were slaughtered before US troops liberated it on April 29th, 1945.