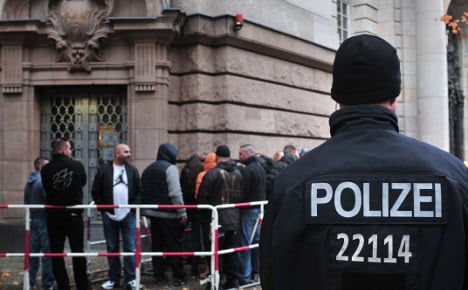 The 11 men in the dock are between 25 and 38 years old and ten of them belong to the banned Hells Angels Berlin chapter.

Prosecutors accuse Hells Angels boss Kadir Padir of ordering the hit in revenge for Tahir's wounding of one of his troops, a bouncer at an Alexanderplatz nightclub, with a knife in October 2013. Padir is one of the 11 on trial.

On January 10th, the camera at the betting shop where Tahir was playing cards recorded 13 men entering through a back door, some of them masked.

While most of the attackers kept other customers under control, one of them drew a pistol and fired eight times, with six shots hitting Tahir, who died on the scene.

The whole sequence of events lasted just a few seconds.

But in part thanks to the evidence of the camera, the police were able to round up most of the men involved.

One of them, Kassa Z., known by his gang as “the Persian”, was so terrified of the possible life sentence on charges of collective murder that he agreed to give evidence to police.

As the star witness in the trial, he has been placed under witness protection.

The case is expected to last until early 2015.

It has revealed serious failings by police in the days leading up to the execution-style killing – and in the history of their dealings with the Hells Angels.

As the case was making its way to court, it emerged that an informant had warned police about the bounty on Tahir's head four times in the days before the killing. Berlin detective chief Christian Steiof admitted in August that the police had credible information about the threats, rather than a single random tip among hundreds, as he had previously suggested.

And the police knew that Tahir had returned to Berlin from a trip in the Netherlands, which they had previously denied.

The Hells Angels Berlin chapter was officially banned in May 2012, but the leaders of the group were warned about the ban several days before it was pronounced – reportedly by a police officer.

That meant that they had time to dissolve the club and keep hold of its money and assets, which otherwise would have been seized by the authorities.