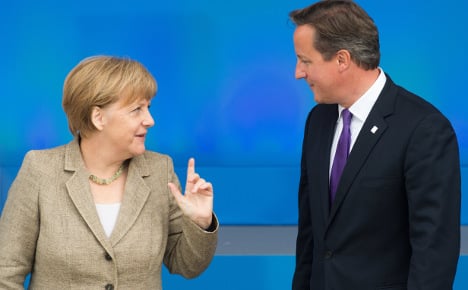 Free internal migration in the European Union is "an important European accomplishment", but Germany shares an interest in battling any abuse of the system, the spokesman said, reiterating the country's stance, after a report in Spiegel magazine that Merkel warned UK Prime Minister David Cameron his country was close to the "point of no return" over the EU.

"The great asset of free movement of persons within the European Union is, for Germany, not negotiable – the chancellor has said that," Steffen Seibert told reporters.

"She has also said there is a strong interest in working together to jointly tackle possible problems with the abusive utilization of free movement of persons," he added.
"In Germany we're slowly losing our sense of where the British are heading," SPD deputy leader in the Bundestag Axel Schäfer told The Local.
"As a pro-European social democrat, I regret this anti-European populism."
He relates a conversation he had with British Minister for Europe David Lidington when he visited Berlin in June.
"Mr Minister, do you think you, Britain, export more to North Rhine-Westphalia or to India?" he asked.
"Then why would you want to leave the Union?" Schäfer asked after Lidington answered correctly that the country did more trade with Schäfer's home state.
Schäfer was also sharply critical of Cameron's promise of a new referendum on Britain's EU membership in 2017 if his Conservative Party wins the next UK election in May 2015.
"The referendum in 1976 was supposed to be binding. It's not like a football player who can change club all the time," he said. "This is totally absurd."
Freedom of movement “is something all the member states have agreed on and one of the fundamental characteristics of the Union,” Julian Rappold of the German Council on Foreign Relations (DGAP) told The Local.

“Merkel has already tasked herself with keeping the EU together, even giving concessions to Cameron to make things easier for him at home,” he pointed out.

“But the debate inside the UK and in the rest of Europe are really decoupled from one another. The readiness of the German government, of Merkel, to make concessions, is really overstated.”

For Rappold, Merkel's warning to Cameron was also directed at German voters, worried that Germany is sacrificing EU principles to keep the UK happy.

“She has always said that one should not tamper with the fundamental principles of free movement in the EU, which is an essential part of the single market.”

He noted that the most Merkel is reported to have said is that a UK exit is “possible” – far from the Chancellor being in favour of a 'Brexit'.

Wohlgemuth told The Local that Germany's aging population means there is much more need for young immigrants to fill skilled jobs in the coming decades than in the UK.

“These are small skirmishes where Cameron is testing the readiness of other EU states to make concessions,” Rappold said.

“Britain is trying to find a German-compatible formulation to get agreement. Merkel is trying to set the boundaries.”

The UK's chancellor, George Osborne, played down the row on Monday morning.

He said: “What we have today is a story which is based on speculation about what Angela Merkel might have said about something that David Cameron might say in the future. So I think it’s a little bit thin.

“We have had good discussions with the Germans; I was in Berlin just a few days ago myself.

"They understand the disquiet that is caused amongst British people when you have people coming from other parts of Europe here to claim our benefits, who don’t necessarily have jobs to go to. This is creating a huge pressure on public services and the British public want this addressed.