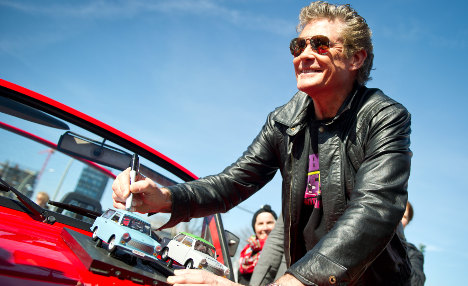 To some, commercializing the socialist GDR marks a happy end to the Cold War. But others see it as a gaudy mockery of history and an affirmation of things the barrier was built to keep out.

It promises “memories of the good old days” and an “unexpected visit” from the East German cops.

But he avoids gigs in western Germany, where he would not strike much of a chord.

“You need to have your roots in the former GDR to understand the humour,” says Herzig, who has played the character at private functions since 1996.

“Often there are guests who were police officers or served in the People’s Army. The ex-Stasi people tend to keep quiet though…” he adds, referring to the infamous East German Staatssicherheit secret police.

Slap in the face?

It’s just one manifestation of the retro-culture of Ostalgie (Ostalgia, playing on the German word Ost – East) that sprang up in the reunified Germany as fast as the Berlin Wall came down.

Limits of taste are also pushed by reminders of the old machinery of repression, like Stasi ‘Funshirts’ that will scarcely raise a smile among those who suffered.

“It’s a slap in the face for the victims, as if someone would go round in an SS T-shirt,” said Stefan Weinert, a documentary film maker whose new work Die Familie (The Family) looks at the impact on relatives of the deaths of 138 people killed trying to flee East Germany in Berlin. Another 872 died on the inner German border.

In 2008, an East and West German even opened a Stasi themed bar near the security organization’s old headquarters in Berlin, complete with shredded files and an urn with fake remains of Honecker.

Before the bar’s eventual closure for lack of custom, a sign outside announced to passers-by: “Come to us, or we’ll come to you!”

Wolfgang Engels, who was shot by border guards twice when escaping to West Berlin in 1963, finds the notion of spin-off GDR entertainment “ridiculous”.

“There are these Ostalgie parties where people come in FDJ (socialist youth movement) skirts,” said Engels, 71. “Most of them don’t even know what it was all about.”

Indeed, while commercial offshoots of the East-West division are thriving, public memory and understanding of the era isn’t faring so well.

A recent poll showed that fewer than a third of Germans under 30 could name the date when the first wire barriers of the Berlin Wall were rolled out.

Former East Germans were better informed, with 69 percent knowing the significance of August 13th 1961, compared to 45 percent of ex-West Germans.

“The memory of the GDR is being peddled and reduced to a footnote in our education,” Berlin’s Tagesspiegel newspaper objected. “And we are losing our past as a result.”

In terms of what sells, goods incorporating iconic images like the 1979 Brezhnev-Honecker fraternal kiss are a sure bet. But its meaning is lost on many visitors to Berlin’s East Side Gallery preserved stretch of the Wall.

Eight out of ten people posing by the mural on a recent day mistook Soviet general secretary Leonid Brezhnev for Mikhail Gorbachev. Honecker drew a universal blank, apart from one guess at former US Secretary of State Henry Kissinger.

Another lucrative angle seems to be recasting dubious experiences as enjoyable ones. For €89, for example, you can take a two-hour tour of Wall sites in a tiny East German Trabant car.

Those who know the ‘Trabi’ recall its general discomfort and the din of its two-stroke 600cc engine. The Wall Ride organizers assure “the world famous sound of an original Trabi engine will awaken your spirit of adventure immediately!”

Zeitgeist is everything. The value of a well preserved Trabant has risen tenfold since production stopped in 1990. Two decades later, one factory condition Trabi even reportedly fetched €17,500.

Likewise, after years of being consigned to junk heaps and attics, original GDR furniture, lamps and clothing now fetch a hefty sum because of their retro value.

And not forgetting the small painted chips of supposed Berlin Wall that sell for €3 to €10 euros in souvenir shops.

If you are not inclined to shell out for a pile of memorabilia, you can still spend the night in authentic Socialist surrounds for €30.

Taste of things to come

Christoph Hein, a writer and intellectual in East Berlin, was an outspoken critic of the old system. But even after the Berlin Wall fell of November 9th, 1989, he wanted the GDR to reform and evolve rather than vanish.

“This is our one chance – our first and last. If we fail, we will be devoured by McDonald’s,” he wrote in diary excerpts published in the New York Times later that year.

Today, visitors to Checkpoint Charlie cannot fail to notice the fast food chain’s outlet looming over the famous border crossing point where US and Soviet tanks faced off in 1961.

When the restaurant opened in 2010 some saw it as befitting the ‘Americanness’ of the site, while others disdainfully dubbed the location Snackpoint Charlie. The checkpoint was dismantled in June 1990, four months before German reunification. The only real remaining relic is the checkpoint sign where tourists pose for photographs with handsome young Germans in US Army uniforms.

The last East German watchtower was removed in 2000 to make way for an office block. But the crowds come here anyway to seek the essence of the Cold War.

The Berlin City government describes the site as having “huge historical and emotional resonance, even accounting for the fact that there is remarkably little left to recall the atmosphere of pre-1989 days”.

There’s always the T-Shirt though.