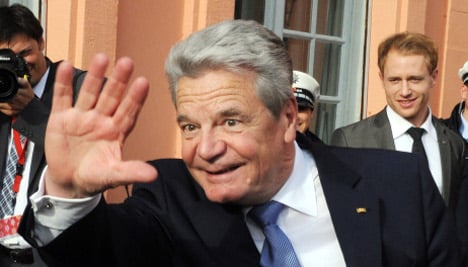 Joachim Gauck – a former dissident Lutheran pastor in the East, and now reunified Germany's head of state – had asked whether the Linke had truly shaken off its repressive communist roots.

He spoke on Sunday as the Linke's leader in the eastern state of Thuringia, Bodo Ramelow, looked set to head a coalition with the centre-left Social Democrats (SPD) and Greens.
Gauck, 74, said in an interview that "people of my age who lived through the GDR (German Democratic Republic) find it quite hard to accept this", adding: "But we are a democracy."
The anti-capitalist and pacifist Linke, Germany's biggest opposition party, was formed as a successor to East Germany's ruling Marxist-Leninists, the Socialist Unity Party (SED), together with far-left members from the former West.
Gauck – Germany's largely ceremonial head of state, who is supposed to stay clear of party politics – asked whether the Linke had "really distanced itself from the ideas the SED once had about repression of people… so that we can fully trust it".
A national co-leader of the Linke, Katja Kipping, charged that wading into party politics was "unbecoming" of a president, saying he "must consider his words very carefully". Ramelow, a trade unionist who grew up in the West, voiced irritation about Gauck's comments and pointed out that he was a fellow Christian.
The Greens' leader Simone Peter told Monday's Die Welt newspaper that, despite his personal history in the East, Gauck "as president must act politically neutral".
The controversy comes as Germany prepares to mark 25 years since the fall of the Berlin Wall on Sunday with celebrations in the capital.
The so-called "red-red-green" coalition shaping up in Thuringia in talks following September elections would be Germany's first where the far-left would be the senior partner.
For conservative Chancellor Angela Merkel, who also grew up in the East, it could pose a headache as it would involve the SPD, her governing partners at the national level, and could foreshadow a broad leftist front running against her in future national elections.
SPD secretary general Yasmin Fahimi called for "calm" in the debate, telling Bild daily that "25 years since the fall of the Wall, it's time to accept the Linke as a party that can assume government responsibility at the state level".
Bild defended Gauck, saying in an editorial that "he doesn't have to please everyone all the time. He can say what he wants. In fact, sometimes he must."
SEE ALSO: Eurosceptics celebrate eastern gains