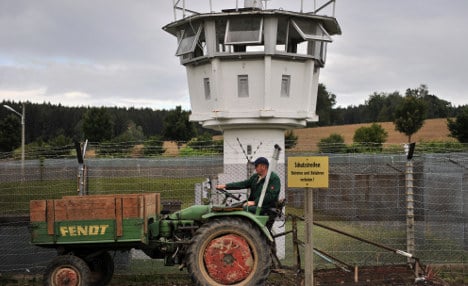 Tractors not tanks at Mödlareuth on the Bavaria-Thuringia border. Photo: DPA

This hilly, rural hamlet  located on the border of the states of Thuringia and Bavaria, is now also celebrating the 25th anniversary since the inner-German border came down.

Mödlareuth has been an oddity since the 19th century, given its location.
As a community it has shared a school, a fire station and an inn, and its people celebrated holidays together, but it was administratively divided between two states, with different postal- and telephone-dialing codes.
Locals even used different greetings on the two sides, with Thuringians usually saying "Guten Tag" (Good Day) and Bavarians opting for the southern variant, "Grüß Gott" (Greet God).
In 1949, the geographic boundary here – a narrow creek that runs through the middle of the village – became a deep geopolitical gulf, as post-war Germany was split into the western Federal Republic of Germany and the communist German Democratic Republic (GDR).

A village cut in half

In the early years of the partition, villagers were still allowed to move on both sides of the small waterway. But in 1952 the GDR put up a wooden fence that cut through the heart of Moedlareuth.
Then in 1966 it was replaced with a concrete wall that was three metres high, topped with watchtowers and guarded day and night.

On either side, stretches of barbed wire created a no-man's land along the impenetrable new frontier.
As elsewhere in the divided nation, some families were dispossessed, others torn apart.
"Overnight, the children on the Bavarian side could no longer attend the school which was located in Thuringia, farmers couldn't reach their fields, the community was shattered," said Robert Lebegern, director of the local German-German Museum founded in 1990, the year the nation reunified.
"At first we greeted people on the other side of the Wall, but they didn't respond. It was only later that we learned they weren't allowed to wave back," recalled Karin Mergner, a farmer who came to settle in Moedlareuth in 1966 to follow her husband.
Her farm is located on the western side, adjacent to a remaining 100-metre portion of wall inside the museum, a relic that now attracts 70,000 visitors each year.
The gash in the landscape, once part of the Iron Curtain between the Western and Soviet blocs, would remain intact here until December 9th, 1989, and gave the village the nickname of "Little Berlin".

Although GDR citizens could not travel to West Germany, except for pensioners and people with special visas, the villagers tried to keep in touch, looking across the barrier from a hilltop.
"When blue baby clothes hung on a clothesline, we knew that a boy was born, and this is how people followed what was happening on the other side," said Arnold Friedrich, who in the 1980s and 90s was mayor of the Bavarian side.

'We fell into each others' arms'

West German citizens were allowed, under tight restrictions, to visit the GDR from time to time, and sometimes Mergner would travel to the East to deliver bananas and coffee, rare treats there, to her neighbours.
To reach the other side of the village, just blocks away as the crow flies, she had to travel two hours by car and endure multiple, tedious border and police checks along the way.
"I never thought I'd see the day the Wall would fall," Mergner, now in her 60s, told AFP.

When she saw on television how the Wall opened in Berlin on November 9th, her hopes rose that the same would soon happen in her home village, but it would take another four weeks until history also swept away the hated barrier in Mödlareuth.
"We all hugged, we drank sparkling wine together… it was fantastic," she recalled.
Friedrich, the former mayor, recalled with his eyes tearing up that "I always used to say that one day I would like to have a beer on the other side of the Wall".
"On December 9th, 1989, it became a reality," he said.
"The sense of community that had existed before the Wall was still intact. People fell into each others' arms, and it was as if the village had never been separated."
SEE ALSO: How 12 words helped bring down the Wall