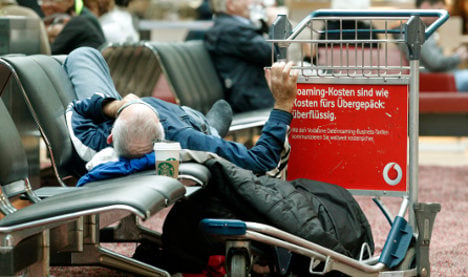 A passenger waits at Düsseldorf Airport which was hit by a Lufthansa strike last Tuesday. Photo: DPA
Germany's national carrier has been hit by industrial action by its pilots, who have staged nine walk-outs since April over plans to raise the age at which they are able to take early retirement.
The last stoppage was a two-day strike last week. The strikes from pilots' union Cockpit have hit all of Germany's major airports and affected tens of thousands of passengers.
"When we look ahead, we can see that the economic slowdown and the continuing declines in our passenger yields in the face of fierce competition will affect our operating scope in the year ahead," said chief executive Carsten Spohr.
"This is why we need to modify our projections for 2015, even though we expect it to produce an operating result that is significantly above this year's," Spohr said.
Previously, Lufthansa had been pencilling in operating profit of around €2 billion for next year and €1 billion euros for 2014.
For the current year, the airline said it "remains confident of achieving its profit targets for 2014 – despite experiencing a difficult third quarter, and despite strike action eroding €170 million from its earnings."
Lufthansa said it expects to post operating profit of around €1 billion euros for the year, "excluding the impact of any further strike action between now and year-end."
In the third quarter alone, Lufthansa said it booked a 24.7-percent rise in net profit to €561 million.
Operating profit was up 24.6 percent at €735 million and revenues edged up by 1.9 percent to €8.458 billion euros in the July-September, Lufthansa said.
SEE ALSO: Do Germany's unions hold too much power?