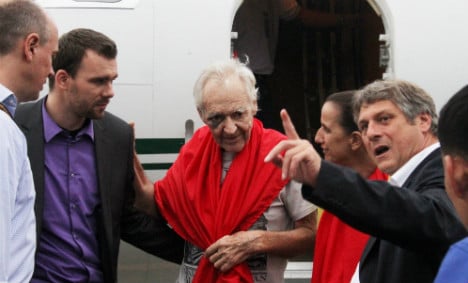 Stefan Viktor Okonek and Henrike Dielen are welcomed by German Embassy officials upon their arrival at Villamor Airbase in Pasay city, south of Manila, the Philippines. Photo: DPA

Officials said a private plane flew Stefan Okonek, in his 70s,and his partner Henrike Dielen, in her 50s, to Manila from the southern port of Zamboanga at dawn after the Abu Sayyaf gunmen released them late Friday.

"With the release from captivity of the two German nationals, our security forces will continue efforts to stem the tide of criminality perpetrated by bandit elements," President Benigno Aquino's spokesman Herminio Coloma said in a statement.

Germany's foreign ministry and the Philippine military also confirmed the hostages had arrived at the embassy in Manila.

"We are relieved to confirm that the two Germans are no longer in the hands of their kidnappers. They are being taken care of at the embassy in Manila," said a German foreign ministry spokesman.

"We thank the government of the Philippines for their close collaboration, undertaken with full confidence," the spokesman added.

The Abu Sayyaf had given the German government until Friday to pay a $5.6 million ransom and withdraw its support for US offensives against jihadists in Syria and Iraq.

The group also threatened to behead one of the hostages unless the demands were met.

Philippine authorities said the two hostages were snatched at sea in April as they sailed near the western Philippine island of Palawan.

During their captivity, believed spent on the Abu Sayyaf stronghold of Jolo island, the kidnappers who are notorious for cruelty used the press and social media to threaten the hostages' lives and force Berlin to fork up the cash.

The couple were forced to beg for their lives in telephone calls to a local radio station as well as uploads of video clips on the Internet.

In one video clip Okonek stood on a hole in the ground that he said he was told would become his grave. In another he screamed in pain as his kidnappers hit him repeatedly on the head.

The kidnappers, a notorious band of militants with links to Al-Qaeda but who recently pledged alliance to the Islamic State group in Iraq and Syria, claimed Friday they collected "no more, no less" than their ransom demand.

Filipino officials said they could not confirm this.

"We are still trying to determine the details of their rescue. There is no change to the government's 'no ransom' policy," Coloma, the presidential spokesman, said in a statement.

Labelled a terrorist group by the United States and Philippine governments, the Abu Sayyaf is a loose band of a few hundred militants founded in the 1990s by Abdurajak Janjalani, an Islamic preacher and veteran of the Afghanistan war.

It was set up with seed money from Al-Qaeda leader Osama bin Laden's brother-in-law.

It has kidnapped dozens of foreign aid workers, missionaries and tourists in the south.

By ransoming off its hostages for millions of dollars the group was able to raise funds to buy more arms, and it cemented its brutal reputation by beheading some of its captives – including an American tourist seized in 2002.

The Abu Sayyaf claims it is fighting to establish an independent Islamic homeland in the Muslim populated south of the mainly Catholic Philippines.

In July, a video appeared on YouTube in which one of the Abu Sayyaf's leaders pledged allegiance to the Islamic State extremists who have taken control of large parts of Iraq and Syria.

But Philippine authorities say the Abu Sayyaf is mainly a criminal gang interested in kidnappings-for-ransom and other lucrative illegal activities.

The group is believed to be holding at least 13 other hostages, including five foreigners, according the Philippine military.

Last year, the group freed retired Australian soldier Warren Rodwell and Jordanian journalist Baker Atyani after ransoms were reportedly paid. The two were abducted separately and each held captive for over a year.