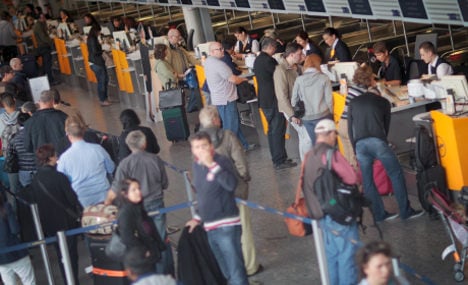 After a 50-hour strike by the train drivers unions, GDL, Deutsche Bahn said the loss of the weekend's services cost the company "tens of millions of euros". One analyst said that the latest strike in escalating industrial action by pilots union Cockpit will cost Lufthansa €30 million.

But all parties accuse the other of the same thing: Neither side will budge. And while they argue over who the one will be to give in, passengers are left at in a holding pattern.

At issue are not only wages, but also union powers. The GDL wants to further its mandate on behalf of train conductors, catering staff and dispatchers currently represented by the EVG union.

Frederik Roeder, from free market group Students for Liberty, said that unions, especially the GDL for which there is no real alternative service, are harming themselves rather than helping those who they represent.

Union membership in Germany is on the decline, but that hasn't brought about a decline in the number of days lost each year to strikes.

Despite getting smaller, they retain huge power to bring Germany to a standstill.

OECD figures showed that more than a quarter of workers in the German labour force belonged to a union in 1999.

The number of days lost to strike action each year in Germany is hugely dependent on what individual unions do each year and thus peaks and troughs.

'Every right to strike'

Thorsten Schulten, an expert in collective bargaining at the Hans Böckler Foundation, said German unions have every right to flex their muscles.

"These are normal collective conflicts," he told The Local from his office in Düsseldorf. "These unions have every right to strike."

He says that while there have been a large concentration in the number of strikes Germans have been subjected to in recent weeks, Germany is still a relatively strike-poor country.

"Germany has far fewer strikes than Great Britain does on an annual basis and they don't go on for as long because unions have more power. The people there get angrier when they are denied access to services they need because bargaining has failed."

In government, labour minister Andrea Nahles is putting together a law that will limit the bargaining power of small unions like GDL, which is exactly why the train drivers' union is fighting so hard to represent the 17,000 members of rival union, the EVG.

"These laws do more to hurt unions that strike action," said Schulten. "A law saying who may bargain and who may not is far more damaging to the public than a weekend of strikes."

Meanwhile, German newspapers are joining the voices of frustrated commuters.

"Of course the GDL has the right to strike for higher wages and less working hours. But the latest strike is nothing more than a PR stunt, a demonstration of might, that the GDL is putting on for its new members and to weaken the competing EVG union," wrote Sidney Ginnes in the Tagesspiegel.

Detlef Esslinger of the Süddeutsche Zeitung, worries that Germany's unions, under GDL leader Claus Welesky, who himself has said that he enjoys his position of power, is following the French labour motto of "First we fight, then we talk. Maybe."

"It means a lot to Germans that there aren't so many strikes in Germany. Firms should not take that public opinion for granted," he warned.

The left-leaning Taz paper, opines that strikes are doing more harm to the politics of union.

"In the short term, these strikes can show the strength of unions to better the compensation of its members. But in the long term, these major strikes risk sawing off the branch upon which they sit."

Do unions in Germany have too much power? Have your say below:

@TheLocalGermany No. If we didn't support labor when they flex their muscles, Germany would be closer to US: crappy for working people.

@TheLocalGermany Unions also keep wages down 4 good workers. I had 2 find a new job when my union wouldn't let me move up after graduating.