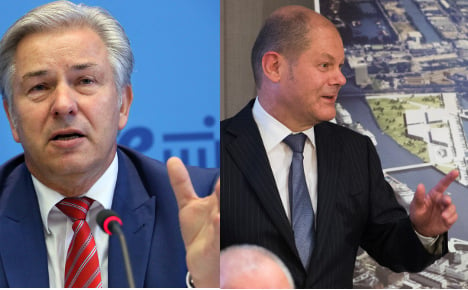 The two city governments submitted their answers yesterday and released details to the public on Monday afternoon in simultaneous press conferences.

“We want to go back to the basics of the Olympic ideal,” said Wowereit. “The athletes must be at the centre of the application, and not the bureaucrats or other people on the fringes.”

Berlin's bid has taken headlines as the soon-to-retire Wowereit put a figure of €2.4 billion on hosting the Summer Games.

Hamburg didn't risk a cost prediction, with a press statement from the city hall promising only that the Games would not be financed with excessive debt or cost-cutting measures within the city government.

Scholz's proposal was for a “sustainable and compact” Games, which would “show that a democratic state can deliver the Olympic Games without hopelessly indebting itself”.

Hamburg plans to hold the majority of the events within a ten-kilometre radius of its Olympic stadium. This central venue would be built on the island of Kleiner Grasbrook in the city's harbour on the Elbe River.

Under the Wowereit plan, many of the events would be held in the surrounding states of Brandenburg, Mecklenburg-West Pomerania, Saxony-Anhalt, and Saxony.

The DOSB now has until December 6th to consider the two bids and come to a decision about which should go forward.

Germany has previously held the Summer Games in 1936 in Berlin – the subject of Leni Riefenstahl's famous Nazi propaganda film Triumph of the Will – and in 1972 in Munich. Unsuccessful bids were made by Berlin in 2000 and Leipzig in 2012.