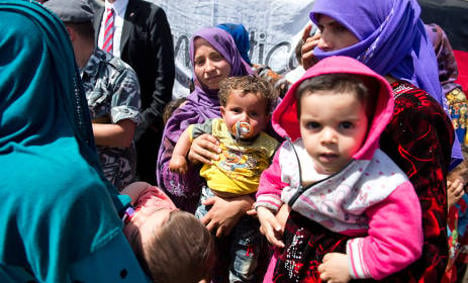 Syrian women with their children in a refugee camp in Lebanon. Photo: DPA

UN High Commissioner for Refugees Antonio Guterres told an international conference in the German capital that the impact of three million Syrians having fled the long and bloody conflict was "enormous" on its neighbours.
"Economics, public services, the social fabric of communities and the welfare of families are all affected, not to mention the security impact of the Syrian conflict in the whole region," he told the gathering.

More than three million Syrians have fled their country since the uprising that began in March 2011, with most taking shelter in Lebanon, Jordan, Turkey and Iraq.
Germany convened the one-day conference to focus not only on the refugees' humanitarian needs but on the wider necessity to shore up the stability of host countries struggling to cope with the exodus.
Several foreign ministers and other representatives from around 40 countries and international bodies are attending the talks.
"The host countries need and deserve much stronger financial support to their budgets to allow them to address the structural gaps," Guterres said, pointing to education, health care and adequate infrastructure.
He described the Syrian situation as "the most dramatic humanitarian crisis the world has faced in a very long time", as ministers from Lebanon, Jordan, Turkey, Egypt and Iraq outlined their struggles.
“I hope that this conference will send a strong signal of solidarity,” Chancellor Angela Merkel said ahead of the conference.

Lebanon in particular is dealing with enormous challenges, as the four million Lebanese play host to one million registered refugees and an unknown number of unregistered ones.

“I can't even speak about the unregistered people,” Merkel said, adding that Germans could scarcely imagine what this wave of people meant for Lebanon.

'Beyond absorption capacities'
"Lebanon, as it has been recognized by all, is beyond its absorption capacities and urgently needs other countries to share its burden," Lebanese Prime Minister Tammam Salam said.
Lebanon last week said it would ask the UN to stop registering refugees who enter the country from war-torn Syria, formalizing a decision to all but close its borders to them.
It already hosts more than 1.1 million Syrian refugees, an enormous strain for a country with a population of just four million.
The influx has tested overstretched infrastructure and created fresh tensions.
About 1.5 million Syrians, including refugees and economic migrants who arrived before the crisis, are currently living in Jordan, with 140,000 Syrian students swelling Jordan's education system, its foreign minister Nasser Judeh said.
Jordanians have shared their housing, schools, hospitals and water "with their Syrian brothers and sisters", he said.
But he also stressed the pressures on the health system and other services, and stiff competition for jobs.
"There is an urgent need for a more robust international response in support of host countries to pre-empt host country and host community fatigue," he warned the conference. German Foreign Minister Frank-Walter Steinmeier, who said the idea for the Berlin meeting came during his last visit to Lebanon, said it aimed to show a "vow of solidarity" for the refugees and host countries.
"Whoever has seen how much, in Lebanon for example, the public health system, the schools, the water supply and much else is utilized by the 1.5 million refugees, knows or can guess how much of an explosive force that really is for the social structures of a country like Lebanon," Steinmeier told reporters ahead of the talks.
Host countries need investment in schools, hospitals, water supply and waste disposal systems and funding should be used more efficiently, he said.
But he also warned that refugees needed hope.
"Hopelessness and despair make people vulnerable to radicalization and manipulation," he said, adding that half of the refugees were children and teenagers

A group of 50 non-government organizations involved in the refugee crisis called for a doubling of humanitarian aid and asked Western countries to take in at least another 180,000 people.

Their call fell on fertile ground in Germany, with Development Minister Gerd Müller saying that “what's going on is a once-in-a-century catastrophe.”

“The money is there” in European Union (EU) countries to help the refugees, Müller said – “we just have to set new priorities.”

Müller said that one billion Euros could quickly be made available from EU funds. Germany itself is to work with UN children's organization Unicef to build refugee camps in northern Iraq.

Christian Schneider, director of Unicef in Germany, said that the world was in a “race against time” to prevent the winter taking a heavy toll on refugees.

“People will die,” Müller agreed, “unless they are immediately and decisively helped.”

Millions of people are currently living in temporary accommodation within Syria or in its closest neighbouring states, especially Lebanon, Jordan and Turkey.

Germany has taken in around 20,000 Syrian refugees.