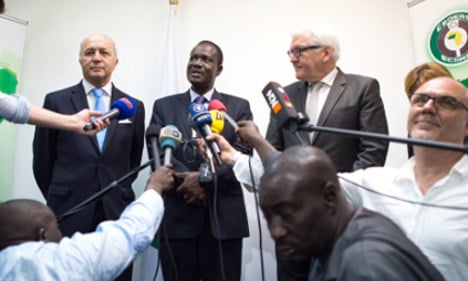 The attack happened on Friday morning near the town of Sagamu in Ogun state, with details of the shooting emerging as German Foreign Minister Frank-Walter Steinmeier visited the Nigerian capital Abuja.

"About four armed men emerged from the bush… and attacked," police spokesman Abimbola Oyeyemi told AFP.
"A bullet hit one German and he was confirmed dead on arrival at the hospital, while the hoodlums abducted another German."
A spokeswoman for the Julius Berger construction firm said the pair – a company employee and a sub-contractor – were travelling in separate vehicles, without their security escort.
Kidnappings targeting foreigners are common in the southern part of the country, with the hostages often released following a payment.
Foreigners have also been abducted in the north in attacks seen as linked to Boko Haram's Islamist uprising.
The Julius Berger spokeswoman said the company was working with local authorities to secure the hostage's release.
A German national was kidnapped in July in northeastern Adamawa state, one of the areas under a state of emergency because of Boko Haram attacks. His whereabouts and condition remain unknown.
SEE ALSO: Photographer dies taking ravine photos