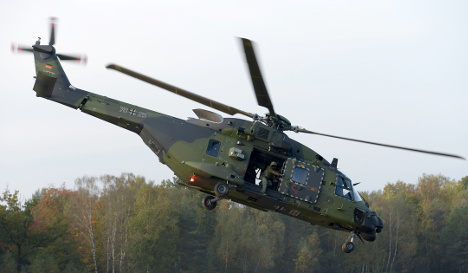 Die Welt reported on Friday that a medical evacuation flight from Uzbekistan to Afghanistan in June had to make an emergency landing in the Uzbek city of Termes after an engine exploded just four minutes into the journey.

The crew were only able to land the stricken machine by the skin of their teeth as many of the aircraft's electronic systems immediately failed.

Engineers later found that a drive shaft in the engine was bent. The helicopter is still in Uzbekistan awaiting repairs, as it could not be moved to Afghanistan to be flown back to Germany by plane with the rest of the fleet.

In a report to the Defence Ministry seen by Die Welt, experts from the P3 engineering company said that a “temporary total flight ban” might be needed for the Bundeswehr's 35-strong fleet.

They found that there were problems with several machines, especially those whose engines had been started several times in one day.

So far the Defence Ministry has not grounded the helicopters, but told Die Welt that checks had been ordered on all of their engines.

Welt reported that special instructions have been issued to pilots on how long they should allow their engines to cool off before starting them again. Possible delays to take-off mean that the helicopters “can't support a Nato deployment,” the P3 experts said – or indeed any foreign deployment until at least 2016.

The NH90 suffers from a number of other problems including pilots' helmets that are too heavy, corrosion damage and flimsy seats.

Defence Minister Ursula von der Leyen has said that she will nevertheless press ahead with a deal to buy 122 further NH90s from Airbus arranged by her predecessors.

The Bundeswehr has been hit with a series of embarrassing equipment failures in recent months, including on high-profile missions to deliver weapons to Kurds fighting Isis in Iraq and supplies to West African countries hit by Ebola.

Retired senior officers have said that the army has suffered from years of underfunding and that much of its equipment is unusable.