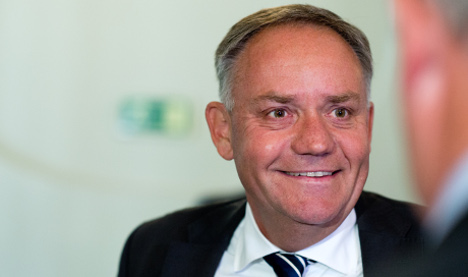 Rainer Schwarz at a court hearing in September into the case. Photo: DPA
Despite failing to open the delayed and over-budget project on time in 2012 and subsequently being sacked, ex-Berlin Airport boss Rainer Schwarz should still be paid around €1.2 million, a city court ruled on Thursday.
The airport must honour Schwarz's contract and pay him until it expires in May 2016, the court said.
Schwarz, who was the airport's boss from 2006 to 2013, was blamed by the board for failing to get the airport open on time and for the massive overspend.
But Schwarz believes he was made a scapegoat when he was fired in 2013 and took the airport to court to get the money which he said was promised to him in his contract.
Berlin International Airport (BER), next to the existing Schönefeld Airport, still has no opening date or final budget projections. The cost is thought to be around €6 billion.
It was initially meant to open in 2012 and cost €2.4 billion. But concerns, mainly over fire safety, means it is unable to operate as its smoke extraction system doesn't work.
Following the repeated disasters, Schwarz was sacked in January 2013.
SEE ALSO: 11 silly ways to waste taxpayers' cash
The 57-year-old did not appear in court on Thursday to hear the judge declare his dismissal invalid.
"There is no good cause for termination," said judge Björn Retzlaff. Schwarz had made no "fatal error" which would justify a dismissal.
The court also looked at whether in the months leading up to the failed airport launch in May 2012, Schwarz withheld information from the board.
It found that the board knew from at least February 2012 that the airport was heading towards its launch date without a proper fire protection system in place.
The ruling means Schwarz will get just under €30,000 a month from March 2014 to May 2016 plus back pay of €269,000 for eight months previously. He will also receive €139,000 in pension payments.
Berlin's politicians were angered by the court's judgment. Stefan Evers, spokesman for the Christian Democrats on the Berlin parliamentary committee into the airport, described the ruling as "incomprehensible".
But the disaster of the Berlin Airport does not appear to be too much of a blackmark on Schwarz's CV – he starts a new job as head of Rostock-Laage Airport on December 1st. His salary at Rostock will reflect the continued salary that he will now receive from Berlin Airport, Schwarz's lawyer said.
SEE ALSO: Secret Berlin Airport docs found in trash