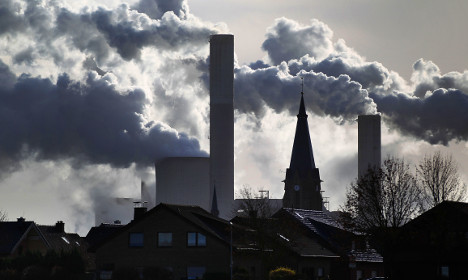 The goals set by the European Union include cutting EU carbon emissions by at least 40 percent by 2030 from 1990 levels.

"I applaud this move, which provides valuable momentum towards the Paris 2015 global climate agreement," Christiana Figueres said in Bonn, where nations are wrangling over parameters of the deal.
"It opens the door to greater ambition by all countries," she said on the penultimate day of the talks in the former West German capital.
And it meant Europe would be ready to meet the targeted deadline for countries to submit their climate mitigation goals in the first quarter of next year.
"The fact that the 28 countries of the EU, in different stages of economic development, can reach a good compromise bodes well for the ability of all nations to come to an effective agreement next year," Figueres said. EU leaders also agreed in Brussels to a 27-percent target for energy from renewable sources, and a 27-percent gain in energy efficiency by 2030.
The six-day Bonn meeting of senior officials must lay the groundwork for the annual round of ministerial-level UN talks in Lima in December.
In turn, the Lima forum has to pave the way to a historic pact that nations have agreed must be signed in Paris next year, that will for the first time unite rich and poor countries under a joint, legal commitment to saving Earth's climate system.
SEE ALSO: Greenpeace finds danger in kids' clothes