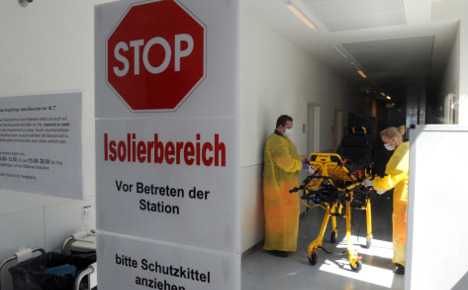 "The voluntary participants will be fully informed and as subjects, will receive protection, including insurance coverage," Dr. Klaus Cichitek, president of the Paul-Ehrlich-Institute told the Hamburger Abendblatt newspaper, adding that 20 to 30 healthy adult volunteers will be tested.

The study will be looking for any adverse reactions to the vaccine.

More than 800 vials have been donated to the World Health Organisation (WHO) by the vaccine's developer, the Public Health Agency of Canada.

Testing will begin this week, a few days later than planned, as the vaccine's transportation was delayed by the Lufthansa pilot strike on Monday and Tuesday.

The vaccine is one of two being tested at various sites.

The one arriving at the UKE  was developed with research from Marburg in Hesse and will be tested in Geneva, Gabon and Kenya as well as Hamburg.

It had already seen a 100 percent success rate in animal testing. It was made by combining a small protein of the Ebola virus with part of a chimpanzee cold virus.

If successful, the WHO hopes that following successful testing, the vaccine can start being distributed to health workers and segments of the general population in the affected areas by the beginning of 2015.

From August 27th to October 3rd of this year, the UKE successfully treated a WHO worker from Senegal with Ebola.