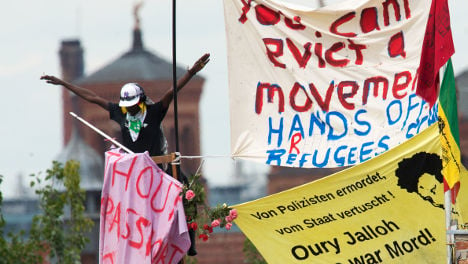 A refugee protests on the roof of the former Gerhart Hauptmann School in Berlin. Photo: DPA

City chiefs approved accommodation for 200 refugees “in particular need of protection” in air-inflated tents on sports grounds on Wednesday. They will be housed in two tents on Lehrter Strasse in central Berlin.

As in Munich, authorities are struggling to deal with the number of refugees arriving in the capital.

Authorities in Munich and in the central state of Hesse have already resorted to tents to house those seeking asylum. Another 12,000 refugees are expected by the end of the year in Berlin and the city's 47 existing shelters and overloaded bureaucracy are unable to cope.

The single centre which conducts medical examinations for tuberculosis and other infectious diseases is becoming a bottleneck, as refugees aren't allowed into large shelters until they are cleared.

One worker there told Tagesspiegel newspaper that they have been cutting corners for two or three years to manage the numbers, with both the numbers and language barriers to treating refugees slowing things down.

Barbara Schwemmer, from the Berlin branch of NGO Caritas, which has provided legal contacts, food and medical supplies to refugees in the capital, said poor bureaucracy was driving the city's response to the growing numbers.

“Not every individual case has been treated adequately,” she told The Local. “The authorities only check where the refugees are from, what status they have, and who's responsible.

“We'd rather they checked the humanitarian background, whether they're traumatized for example.”

A lot of the time the priority is to find out which other EU countries or German states refugees have travelled through to reach Berlin so that they can be returned there, Schwemmer said.

Under EU rules the country where asylum seekers first arrive is responsible for taking care of them, meaning many refugees who report to the authorities in Germany can be sent back to Italy.

Berlin and other German states have called on the federal government to do more to support housing and care for refugees, which until now has been paid for by states and local governments.

Chancellor Angela Merkel's chief of staff Peter Altmaier met the leaders of state chancelleries in Berlin on Thursday to discuss the problem.

Local governments especially say they need financial help and for federally-owned buildings to be converted for use as accommodation centres, as well as easing construction regulations to speed up those conversions.