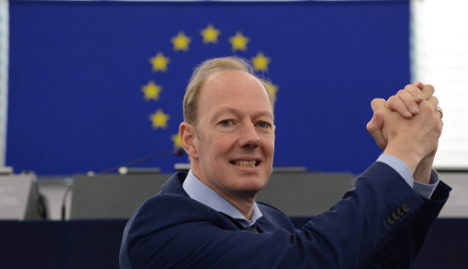 There’s another reason why he’s overjoyed. He receives €33,000 a month for himself and his five or so staff – he doesn’t know what they all do but “they’re always very polite," he tells The Local in an interview.

He also has access to a chauffeur-driven limousine, gets to fly business class and only worked for a total of 120 seconds in one week recently when he annoyed two aspiring EU Commissioners during the parliament’s confirmation hearings.

And he invited Günther Oettinger, the designated Digital Commissioner, to talk about how he lost his driving licence for being over the drink-drive limit in 1991.

But driving has become a thing of the past for Sonneborn. “I don’t yet use the limousines to go shopping, it takes a little time to lose one’s inhibitions, but that’s sure to happen."

Sonneborn, a former editor of satirical magazine Titanic, set up Die Partei in 2004 for a laugh.

But its manifesto proved compelling and it found itself actually getting votes as it gradually adopted all the trappings of a proper party, with an executive board, regional groups and even a youth division, the "Hintner Youth," named after its general secretary, Thomas Hintner.

Then came its greatest triumph when some 180,000 Germans, or 0.6 percent, voted for them in the EU election in May this year.

Die Partei lured them with pledges to build a wall around Switzerland, put Chancellor Angela Merkel on a show trial in the Berlin Olympic stadium and to frack the rotund politicians Sigmar Gabriel and Peter Altmaier for cheap gas.

Sonneborn, 49, tall and always respectably besuited, wouldn’t look out of place behind a bank counter or selling sofas in department store Karstadt.

Yet he has a long history of delivering biting satire and entertaining stunts with a deadpan face that inspires confidence, at least initially.

In 2010, when Greece was on the brink of defaulting in the euro crisis, he walked around Berlin with a camera team and a Greek man in national costume, asking residents to adopt a Greek. Many refused, but some kind souls considered it.

He has erected a symbolic stretch of wall along the former border with East and West Germany.

He has also demanded that eastern Germans pay retroactive licence fees for all the West German TV they secretly watched under communism.

And he has called for Dresden's famous Frauenkirche church, destroyed in a World War II air raid and painstakingly rebuilt after unification, to be dismantled to provide stones to build a new wall.

He even claims to have ensured that Germany hosted the 2006 World Cup, by “bribing” seven Fifa delegates ahead of the 2000 vote. He sent them a fax offering baskets of sausages and cuckoo clocks if they backed the fatherland.

‘As committed as Napoleon and Hitler’

And now, Europe. Sonneborn’s vote-winning slogan was “For Europe, Against Europe.”

He points out that opinion polls show 70 percent of Germans aren’t interested in Europe. “We’re the party for those 70 percent. But we also say yes to Europe so everybody opposed to or in favour of Europe can vote for us.”

He describes himself as a “committed European, as committed as Napoleon and Hitler.”

A propos Hitler, his seat in the Brussels plenum is just in front of Udo Voigt, the former leader of Germany’s neo-Nazi National Democratic Party. “I took a look at his desk to see if he’s scratched any swastikas into it yet, but he hadn’t.”

Sonneborn is also wedged between members of the French National Front, the far-right Austrian Freedom Party FPÖ and the eurosceptic, immigrant-sceptic Alternative for Germany (AfD). It’s something of a rogues’ gallery, he feels, and the old-fashioned black headphones don’t help.

“They make the place look like the Nuremberg trials,” Sonneborn said. “I’m going to bring extremely big Mickey Mouse headphones so I don’t look like a criminal.”

He doesn’t hold his new place of work in high regard. “The parliament is a kind of State Duma, like the East German People’s Chamber that merely rubber stamps what the Commissions and its officials have formulated.

His aims are manifold. He wants Britain kicked out of the EU, for one. “It doesn’t belong to the continent, just take a look at the map.”

And he wants to cement Germany’s utter hegemony of the 28-member European Union by ensuring that more top posts are allocated to Germans.

“Having foreigners in leading positions in Europe is unacceptable. I want a core Europe with 26 satellite states plus a rainy offshore island that doesn’t really belong and that shows much too much respect for bankers.”

He was wooed last Thursday by Nigel Farage, the leader of the UK Independence Party (Ukip), to join the eurosceptic parliamentary group Europe of Freedom and Direct Democracy (EFDD), which collapsed after Iveta Grigule, a Latvian MEP, left.

He has another venture: to bring back a version of the EU’s legendary bendy banana/curved cucumber directive, repealed in 2008, that sought to limit the curvature of the fruit.

Sonneborn wants the EU to rule that the barrels of all exported German rifles and tank cannon be curved by an angle of one centimetre in five.

“I already have the backing of 20 MEPs and I only need forty MPs to force the Commission to seriously consider this idea. That should be possible," he says.

Instead of exporting weapons, Germany should be exporting its expertise in building walls, says Sonneborn.

“Demand for walls is increasing around Europe. Petro Poroshenko (the Ukrainian president) has seized on the idea and we’ve invited him to Berlin to see how it’s done.

"The Scots want one, the Spaniards too, Switzerland needs several walls, Belgium needs them urgently because they hate each other more than anyone. We’d like to help.

"We’re in touch with the Israelis to make sure we keep up to date on design. This wall building programme can also help us overcome the euro crisis.” So what is his point? Did he get into politics to create satire? Or vice versa? A bit of both, it seems.

“I don’t know how to do anything else. I can only work with satire. But I do have an authentic desire for power.”

He believes that his stunts, and his televised reports on his experiences in parliament for Spiegel TV, are getting more young people interested in the EU.

“We post a lot on Facebook and Twitter and YouTube and get a lot of comments from people saying they’ve heard more about the EU in the last three months than in the 20 years before.

"Young people are interested, so I think it’s a good situation for the EU. Although I suspect they might not see it that way.”