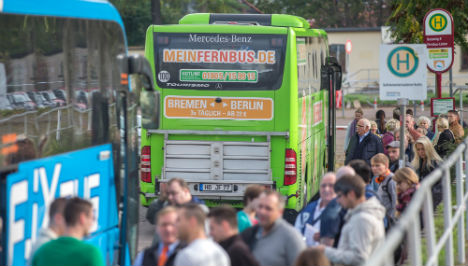 Only about a third of traffic on major lines was running, rail network Deutsche Bahn said in a statement, adding that service would be assured on around 30 percent of regional and city lines.

Launching its biggest strike since 2008, the GDL union called on its members to walk out from 3.00 pm on Friday on freight services and from 2.00am on Saturday on long-distance and regional passenger services.

The stoppages – on traditionally one of the busiest weekends in the autumn because of a school holiday – are due to last until 4.00am on Monday.

The union accused Deutsche Bahn of stone-walling in talks over its demands for a five-percent wage hike and a shorter working week of 37 hours.

Deutsche Bahn slammed the new industrial action – the fifth in recent weeks – as excessive, accusing GDL chief Claus Weselsky of putting his own "delusions of omnipotence" and "thirst for power" before the interests of the train drivers and passengers.

"With its 50-hour strike on a holiday weekend, GDL and its chairman Claus Weselsky has lost all sense of proportion," the company said in a statement.

"GDL is running amok," it added, pointing out that the autumn school holidays began or ended this weekend for 11 of Germany's 16 regional states.

The magnitude of the industrial action was surprising in a country where warning strikes rarely last more than a day. The last time Deutsche Bahn was hit by an industrial dispute as serious as this was in 2007-2008.

Berlin is working on legislation to stop small groups of employees from paralyzing large parts of the country's infrastructure, such as rail and air travel, after several airline strikes. A draft law is expected in November.

GDL accused management of issuing "nice-sounding statements with no substance".

The union also wants to represent other groups of employees within Deutsche Bahn, not just the drivers, but conductors, catering staff, dispatchers and other staff as well, a demand which management rejects.

In addition to the rail strikes, travellers in Germany have also been hit recently by repeated walkouts by pilots of airlines within the Lufthansa group.

This week, the pilots of Lufthansa's low-cost subsidiary Germanwings walked off the job for 12 hours on Wednesday, grounding hundreds of flights and thousands of passengers.