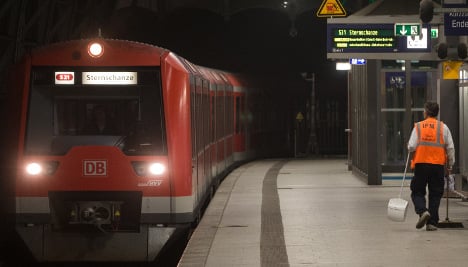 The pay rise, which according to news agency dpa would come into play over the next 18 months in three stages, meets one of the drivers' union's key demands.

The GDL union announced the strike, starting on Saturday at 2am until Monday at 4am, on Friday morning. Freight drivers will start their strike earlier at 3pm on Friday.

It will hit tens of thousands of passengers on city S-Bahn trains, regional and intercity services.

Many people who were planning to depart for or return from their autumn school holidays could be stranded and the trains put on for the weekend's football matches will all be affected.

And the freight traffic strike could have severe consequences for businesses who depend on the railways, experts warned.

“This is a catastrophe,” said Gunnar Gburek of the Federal Association for Logistics and Purchasing said. “Even if there aren't breaks in production, companies will suffer financial losses.”

“The parties should restart their discussions immediately,” Transport Minister Alexander Dobrint told the Passauer Neue Presse. “The only solution is around the negotiating table.”

Rail operator Deutsche Bahn (DB) asked customers to check its website or call its free hotline on 08000 99 66 33 for details of the replacement timetable.

It offered to refund tickets and allow all passengers to use pre-booked tickets on alternative routes and departures.

DB earlier accused GDL leader Claus Weselsky of "losing all sense of proportion" after he announced the 50-hour strike.

“GDL is running amok,” a statement on the DB website read. "This isn't about the interests of train drivers, but the omnipotence fantasies of a union official.”

It is the GDL's third strike since last week and will cause further chaos on Germany's trains, which only returned to a normal service on Thursday following a 14-hour walkout by drivers on Wednesday.

But Weselsky accused Deutsche Bahn on Friday of being all talk and no action.

DB must “end its stonewalling on the back of its customers and negotiate speedily with the GDL,” Weselsky said.

In response to DB's claim that they are willing to negotiate, he said: “This statement sounds good but is without substance.”

“Our employer knows that we're also ready to make concessions in substantial negotiations.”

DB drivers have received a minimum two-percent wage increase every year since 2008 and in 2008 were given an 11 percent wage rise, following the last big dispute between the union and rail operator.

But the union wants a five-percent pay increase and a two-hour cut to the working week, reducing it to 37 hours, as well as the right to represent a larger proportion of DB staff in wage negotiations.

Some people took to Twitter to vent their feelings about the strike.

@TheLocalGermany @ITIGerNet Extremely annoying for half-term holidaymakers going by train (like myself). Release the hounds, Jasper!

@TheLocalGermany They're very close to over-playing their hand. They might want to get a clue before someone pulls a Reagan on them.

@TheLocalGermany Yes, I was; had to opt for a bus instead. Thankfully buses offer services between my source and destination.

YEAH! Another train service strike from Saturday 2 a.m. until Monday 4 a.m. How I should come to work?! Thank you #GDL ! FU!

I think #GDL Train Driver Union is quitting any national social responsibility. It is an deep abuse of anything that unions achieve in past