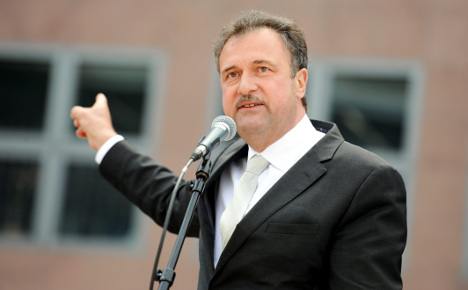 Union GDL's demands for a five-percent pay increase and a 37-hour working week for drivers have received much of the attention during this month's round of industrial action against rail operator Deutsche Bahn (DB).

But power, rather than working conditions, is at stake for the union itself. Boss Weselsky wants the right to represent 17,000 of the rail operator's non-driver employees in negotiations.

By almost doubling his union's size, Weselsky hopes to avoid the GDL becoming irrelevant through a government plan to exclude the GDL from wage negotiations by only including the larger Railway and Transport Union (EVG).

Without the power to negotiate on behalf of its members, the GDL would lose its raison d'être – and Weselsky would lose his ability to bring Germany to a standstill.

He thus faces a struggle to hold onto power against three formidable opponents – Deutsche Bahn, the government, and the much larger rival rail union EVG.

His members will “strike until the end,” Weselsky pledged in early October. “Otherwise we might as well dissolve ourselves.”

A taste for power

Weselsky began his career at East Germany's Deutsche Reichsbahn (DR) in 1975, spending two years training to be an engine driver.

But it wasn't until 1990 and German reunification that he became politically active, joining the GDL – along with with 95 percent of his fellow train drivers from the Eastern states – in May that year.

The 55-year-old worked his way up through the union hierarchy in the Dresden and Berlin-Brandenburg-Saxony regions before joining the national leadership as policy lead on wages in 2002.

After two years as deputy head of the union, he became national president in 2008.

The GDL, whose origins in 1867 make it Germany's oldest union, is an unusually powerful beast, and Weselsky enjoys being in the driving seat.

“It's awe-inspiring, to have power,” he told the Welt am Sonntag. “I already feel satisfied that we're in a position to put limits on our employer in this confrontation.”

He maintained many of former president Manfred Schell's practices, making sure that his union was better organized, and its president better dressed, than the competition.

Weselsky sees himself as the rearguard of a shrinking labour movement in a Germany where only 18 percent of workers are unionized, according to 2011 figures. That is a fall from 25 percent in 1999.

“The GDL is standing up to this development,” he said. “That's how it's playing a leading role in the union movement.”

The first East German to head a major employee organization in Germany since reunification, Weselsky makes much of his origins, especially maintaining his thick Saxon accent.

He knows that a large proportion of the GDL's 20,000 members are former DR employees, and like to see one of their own leading from the front.

“I grew up in the DDR,” he once said. “In the Reichsbahn, the train drivers were always at the back of the line. That shouldn't be so and it won't be any more.”

Weselsky's identity politics are rewarded at union meetings, when his speeches are greeted with total silence and attention – until the waves of applause break out after he's made his point.

And he's made sure to “cleanse” the union's inner circle of the disloyal, in predecessor Schell's words, who went on to compare Weselsky to Chairman Mao and President Assad of Syria. Weselsky has done nothing to discourage the dictatorial comparisons.

“I never question my decisions,” he says. “Even if a decision turns out to have been wrong the next day, it was still right at the time I made it.”

Anyone outside his closest confidants is frozen out and he has already got rid of two deputy presidents in 2014 alone.

Even his favourite pastimes, scuba diving and motorcycling, are solitary pursuits.

Schell gave up the honorary presidency of the union over Weselsky's tactics and recently joined a group called “Initiative for the rule of law and democracy in the GDL”, which is calling for Weselsky's resignation.

“His headstrong and conflict- rather than consensus-oriented negotiation policy is doing the GDL more harm than good,” the group's spokesman, Volker Siewke, said.

“He's acting as if he's off to a holy war,” he told the Tagesspiegel recently. “The way he's going, he'll bring the GDL down.”

His controversial character threatens to overshadow drivers' unhappiness with pay and conditions which led 91 percent of union members to vote in favour of the strikes and has brought them to the picket line twice in a week.

Train drivers want to work 37 hours a week, rather than the current 39 and, at the same time, have a pay increase of five percent.

Deutsche Bahn drivers currently earn a basic €1970 a month when starting out and €2142 after four years. But they receive additional allowances on top of that which Deutsche Bahn say is worth another €600 a month.

The GDL disputes this figure and argue the perks are worth €300 a month.