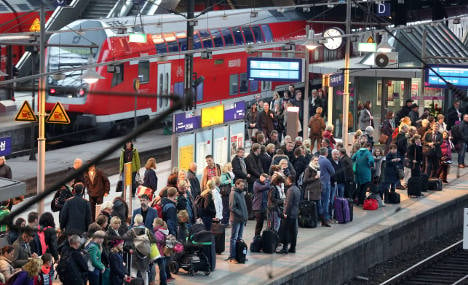 Passengers desperately tried to get a train on Wednesday before the strike began. Photo: DPA

Only one in three long-distance trains ran on Wednesday morning ahead of the 14-hour strike by the drivers’ union GDL.

Rail operator Deutsche Bahn (DB) began operating a reduced schedule from midnight and many intercity services were cancelled on Wednesday morning to reduce the impact of the strike.

A Deutsche Bahn spokesman said that from 9am regional trains also ran a reduced service.

Buses, U-Bahns and trams are still running however.

Despite the warnings, the strikes took lots of passengers by surprise. Commuters were still trickling into Berlin S-Bahn stations on Wednesday afternoon, bewildered at the empty tracks, including at Schönhauser Alle station in Prenzlauer Berg.

One stranded passenger, Lars Düseler, 37, said: “I did know there was a strike, but I forgot. I was going to take the Ring to Greifswalder, but now I will probably have to take at least half an hour longer with the U-Bahn and the tram.

Two men wearing red vests with the green S-Bahn logo emblazoned on them were also stood on the Schönhauser Allee S-Bahn platform, armed with paper maps of Berlin’s train system.

They were there to inform confused passengers of the strike and try to help them find alternative routes.

One told The Local: “A lot of people don’t know there is a strike. I am not sure why, there are stickers and signs all over the place, it’s been on TV and the radio.

“People also get really annoyed when you tell them there is a strike, they get all aggressive. But that’s natural, I don’t really get offended.”

Anyone who has bought a ticket can get a refund from Deutsche Bahn if their service has been cancelled due to strikes.

Deutsche Bahn personnel chief Ulrich Weber criticized the union and said he had arranged to speak to GDL boss Claus Weselsky on Wednesday evening to try to find a solution before the union announced the latest strike.

He said it was “brazen” for the GDL to call a strike before talks.

"The GDL doesn't want to work together with anybody," he said. "They're prioritizing their craving for power over reasonable negotiations."

That was a point of view shared by passengers' association Pro Bahn.

"It's becoming more and more obvious that the GDL Union is doing more to extend its own powers than for wage negotiations," a spokesman said.

The knock-on effect of the walkout is likely to last well into Thursday. Deutsche Bahn warned travellers to allow for delays on Thursday morning.

And with no end to the dispute in sight, further strikes are possible. “We’ll announce any industrial action in good time,” Weselsky told Tagesspiegel newspaper on Wednesday. He said he believed the GDL had given passengers enough warning for Wednesday’s strike. They were announced at 6pm on Tuesday.

In a statement, the GDL said Deutsche Bahn was trying to “force” them into an agreement with the rail operator’s own in-house union, the EVG, which would see the GDL lose its independence to Deutsche Bahn and the EVG.

Hot on the heels of Wednesday's national walkout by train drivers, pilots' union Cockpit announced that its members at Lufthansa subsidiary Germanwings would strike for 12 hours between midday on Thursday and midnight on Thursday.

A total of 116 flights were cancelled when Germanwings pilots last went on strike in August.

The union, which represents pilots across the Lufthansa group, has gone on strike six times since April over pensions and retirement age rules.

The strikes since April have affected a total of 4,300 flights and around half a million passengers, as well as costing the airline tens of millions of Euros.