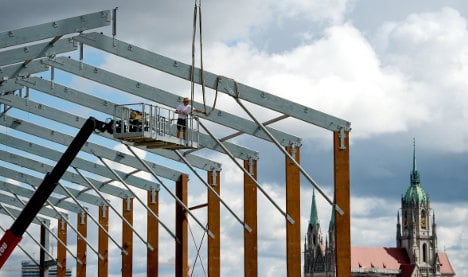 City workers will put up tents for between 300 and 400 asylum seekers on the Theresienwiese, which is also host to the Tollwood Christmas festival, deputy mayor Christine Strobl told the Süddeutsche Zeitung (SZ) on Tuesday.

The city is also considering using the Schützenzelt (marksmen's tent) put up for Oktoberfest and the Olympic stadium as temporary accommodation.

“If the city asks me, I'll consider it,” Schützenzelt manager Edi Reinbold told the SZ.

But he pointed out that the tent wouldn't withstand the winter.

“No tent holds out snow and they're all unheated,” he told the Münchner Merkur.

"The Theresienwiese can only be an absolute last resort," said Hans Podiuk, head of the right-wing Christian Social Union (CSU) on the Munich city council.

"Pictures of refugees beneath the Bavaria [statue] would travel around the world."

Authorities are also looking at using shipping containers as temporary housing, although the city has a limited stock.

The Munich city and Bavarian state governments disagree over how best to accommodate the refugees.

The state could ask the military for help with housing by requesting tents for refugees in Munich but has so far failed to do so.

“Despite several consultations, we haven't managed to get the state government to do anything,” he said.

He made the comments after ordering the overcrowded Bayernkaserne, a former barracks, to be closed to new arrivals on Monday “until conditions worthy of human beings are restored.”

Meanwhile the McGraw barracks in the south of Munich were supposed to be converted for refugee use by November, but the project has been delayed until next year.

The lack of space is also causing administrative problems, as the Bayernkaserne is the only place with offices and medical examination rooms available.

Even there, many refugees are not properly registered with the authorities.

Hundreds of refugees have already been moved to tents put up for Oktoberfest visitors at a campsite, but those tents cannot be used as winter accommodation.

States are obliged to provide temporary facilities to for refugees, where they are supposed to stay for between six weeks and three months before more permanent accommodation is found for them.

But the growing number of refugees arriving in Germany from Africa and the Middle East, especially in Bavaria, is placing strain on the system, turning these points of arrival into overcrowded bottlenecks.

Munich is the point at which two routes taken by many refugees fleeing to Germany end: one from North Africa via Italy, and the other from the Middle East through Greece and the Balkans.

Over 8,000 asylum seekers were in Munich accommodation in August 2014, the latest government figures show.