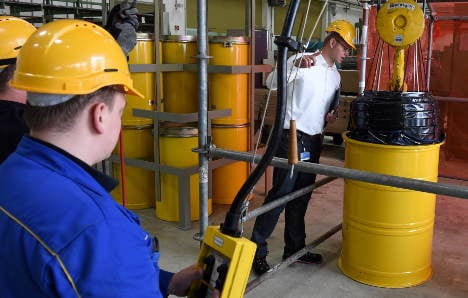 Vattenfall, the energy company which manages the Brunsbüttel site in Schlewswig-Holstein, reported that 102 of the 335 barrels stored in the site's six underground chambers were corroded, leaking or had loose lids.

Some of the containers are so deformed that they can no longer be moved, as they no longer fit into the robotic gripping arms installed at the site, the inspectors reported.

“The chambers are secure and there is no danger for the personnel or the local population,” Vattenfall said in a statement released on Thursday,

The Brunsbüttel site harbours 631 barrels of nuclear waste in its six chambers, which have been used for storing waste since 1979. The nuclear power plant was decommissioned in 2011.

The barrels contain resin used for water filters, residue from contaminated water and various other types of waste.

So far, Vattenfall has only inspected four of the six chambers using remote cameras.

The chambers themselves are built from concrete and have walls over a metre thick to prevent radiation escaping into the surrounding environment.

The energy company has sent a proposal to the Schlewsig-Holstein Environment Ministry for making the storage facility more secure, including by installing dehumidifiers to slow corrosion, which has yet to be approved by government experts.

“The chambers [at Brunsbüttel] were supposed to be a temporary storage facility,” Vattenfall said in a statement on Thursday. “They weren't designed to for long-term containment.”

It was originally planned to store the barrels at Brunsbüttel until they were moved to the 'Konrad' mine shaft site in Lower Saxony. This permanent storage facility was to be completed by the mid- to late 90s, but has been subject to successive delays. Completion dates in 2014 has been missed and a target of 2019 is also unlikely.

The latest estimate for completion is the start of the next decade.