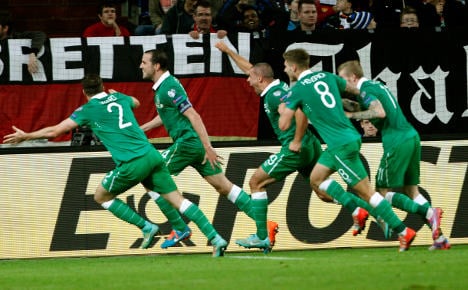 John O'Shea celebrates Ireland's equalizer. Photo: DPA
Germany were heading for a 1-0 win in Gelsenkirchen after Toni Kroos’ second-half goal before John O’Shea stabbed his shot home in the 94th-minute to celebrate his landmark in style.
The result keeps Germany fourth in the Group D table after a defeat to Poland on Saturday, but level on four points with third-placed Scotland while the Irish are level on seven points with leaders Poland, but second on goal difference.
One victory, one loss and one draw in their first three games means it is Germany’s worst start to a tournament qualification.
“We’re all disappointed. I think that was Ireland’s only chance of the game and they scored from it,” said Germany coach Joachim Löw after their win, draw, and defeat from their three games.
“In the last few minutes, we were simply naive.
“It was a difficult game, Ireland packed their entire team behind the ball and we should have had some patience.”
Real Madrid’s Kroos said the world champions threw the win away after his 70th-minute goal.
“It’s obviously incredibly disappointing, that was unnecessary,” said Kroos. “We played well for long stretches, but at the end we didn’t keep calm.
“This is incomprehensible to me, we’ve lost our way in the final five minutes and we were punished accordingly.” Germany host minnows and bottom side Gibraltar in Nuremberg next month while Ireland had a confidence boost ahead of their clash with Scotland in Glasgow.

Despite the world champions dominating possession with 19 goal attempts to Ireland’s paltry two, O’Neill’s side were rewarded for their battling spirit with a valuable point to stay second in Group D.
“We just didn’t give up and kept going. I never felt we were actually out of the game, which is great credit to the players,” said O’Neill.
“It’s a fantastic effort from the players, they were missing a few players, but so were we.
“Spirit alone will never be enough, but there is a great never-say-die attitude amongst the players, this keeps the confidence going.
“I still think Germany are the strongest team in the group.
“They could easily have beaten Poland and will be disappointed to have given away an equalizer, but for us it is a precious point.”
Sunderland’s O’Shea was delighted with his fairytale finish, which leaves Ireland with two wins and a draw from their opening three games.
“Germany had far more chances. In the last ten minutes, we had to hope to get something on the counter,” said the centre-back after stabbing his 94th-minute shot past Germany goalkeeper Manuel Neuer.
“At the end, the best goalkeeper in the world couldn’t keep it out. It was a great moment.
“We have a fantastic spirit, we didn’t want to come off having lost with people thinking we just did ok.”
SEE ALSO: Schürrle out of qualifier