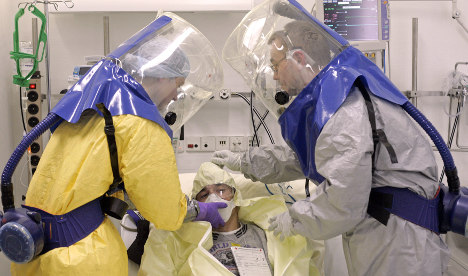 “At the moment 50 beds are ready which can be used immediately,” a health ministry spokesman said on Monday.

Germany’s network of treatment centres which specialize in highly contagious disease have a good international reputation, the spokesman added. “These cases are drilled regularly.”

Addressing fears that bringing in Ebola patients to Germany could led to an outbreak in the country, Lars Schaade from the Robert Koch Institute told broadcaster ZDF: “The risk is low but it is something we must bargain for.”

Frankfurt, Düsseldorf, Munich and Hamburg airports have specialist zones at their airports where planes could be diverted with suspected cases of the disease.

The World Health Organisation (WHO) has recorded more than 8,000 Ebola cases and more than 4,000 deaths in the outbreak this year. Liberia, Guinea and Sierra Leone in West Africa are the worst-affected countries.