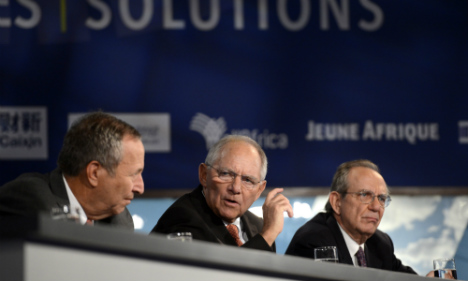 Wolfgang Schäuble at the IMF meeting in Washington DC on Thursday. Photo: DPA

A seemingly never-ending stream of gloomy numbers sent the stock markets into a tailspin and exposed the fault lines in economic thinking across the 18-country euro area.

ECB chief Mario Draghi insisted that growth depends on reforms by governments, but also sent a strong signal that the central bank could ramp up stimulus for the economy.

"We are ready to alter the size and/or the composition of our unconventional interventions, and therefore of our balance sheet, as required," he said in a speech in Washington.

On the sidelines of the World Bank and International Monetary Fund meetings in Washington, Draghi and German Finance Minister Wolfgang Schäuble differed over how to pull the eurozone out of its economic quagmire.

The waves of gloomy data last week were relentless.

Germany, in particular, on which much of the European economy depends, was hit by unexpectedly sharp drops in factory orders and industrial output and a slump in exports.

On top of this, the country's leading economic institutes cut sharply their growth forecasts for both this year and next.

This and prevailing international tensions sent shivers through stock markets, with European stocks and the euro falling sharply.

IMF chief Christine Lagarde, who has already referred to a risk of deflation in the eurozone, warned that there was a 35-40% chance of the region slipping back into recession.

And in Paris, the Organisation for Economic Cooperation and Development also pointed to a weak outlook for growth in the eurozone, and in Germany in particular.

Until recently, Germany had managed to escape the worst of the eurozone crisis, thanks to difficult and painful reforms pushed through a few years ago.

Notching up growth while most of its eurozone partners were mired in recession, Berlin has persistently argued that other countries have no choice but to follow the path of budget rigour, or austerity, too.

But amid growing signs that the German economy is also now stalling, the anti-austerity movement is gaining confidence.

At a meeting of some EU leaders in Milan this week, Hollande threw down the gauntlet to German Chancellor Angela Merkel by saying that instead of further austerity measures to trim France's budget deficit, the rules should be eased to reverse flagging growth across the eurozone.

The German think-tanks took a similar line, arguing that Germany "isn't making sufficient use of the margin for financial manoeuvre with regard to investment, such as in infrastructure."

The 18-member eurozone has the world's second-biggest economy after the United States, and the stream of bad news re ignited concern that Europe's woes could jeopardise a global recovery.

Eurozone growth stalled in the second quarter and inflation slowed to the weakest level for almost five years.

The ECB, which has repeatedly charged to the rescue in the past, has cut its interest rates to record lows and unveiled a raft of measures to inject cash into the economy.

That will rub with German Finance Minister Schaeuble who stuck to Berlin's mantra of fiscal discipline.

More growth will not be "achieved by writing checks," Schaeuble insisted, calling on Italy and France to implement "essential structural reforms" and cautioning against a further loosening of monetary policy by the ECB.

Schäuble saw dangers if some countries were to use easy money to delay necessary reforms.

"You can't always spend other people's money in a monetary union," he said.

Schäuble dismissed fears that Germany was heading for a recession.

"We don't have a recession in Germany. We have a weakening of growth," he said, blaming geopolitical risks in Ukraine and the Middle East as well as the impact of problems in the eurozone on Germany's export-orientated economy.

"We are the engine of growth in the eurozone," Schäuble said.

He appears to have the backing of Dutch Finance Minister Jeroen Dijsselbloem, who heads a group of euro-area finance ministers and who also said that governments were too reliant on the ECB.

"We should expect a little less from the central banks and a little more from the politicians," Dijsselbloem said at the IMF/World Bank meetings in Washington.