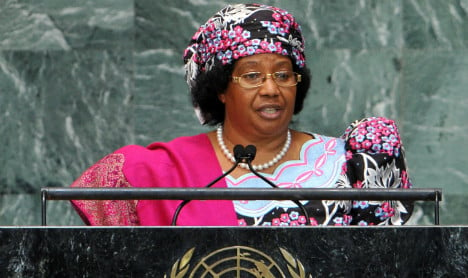 "The German-funded audit is to quantify the amount misappropriated over the period 2009-2013," Katrin Pfeiffer, head of development cooperation at the German embassy, said in a statement.

Last year, Malawi uncovered a corruption ring involving government officials, in which at least $30 million was swindled from state coffers, according to an audit already done by British auditors.

The scandal, dubbed "Cashgate", prompted foreign donors – who provide around 40 percent of Malawi's budget – to pull the plug on aid of around €118 million.

The pilfering of public funds is said to have taken place over just six months, from April to September 2013, during former president Joyce Banda's term in office.

Banda fired her entire cabinet in the wake of the scam which she blamed on "loopholes" in the public payment system introduced by her predecessor Bingu wa Mutharika.

Pfeiffer said there were suggestions the looting actually took place over a longer period dating back to 2009 when Mutharika, who died suddenly in 2012, was in power.

The audit will be conducted by PriceWaterhouseCoopers. The German embassy gave no details about what period of time it would cover.

The Cashgate scheme is the biggest financial scandal in Malawi's history, and helped push former president Joyce Banda out of power during elections in May.

A number of government officials implicated in the fraud are facing criminal charges, and a first official was jailed last month for three years over the scandal.