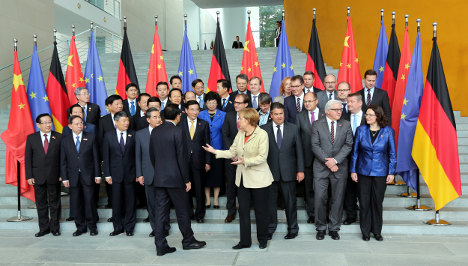 Merkel with German and Chinese politicians in Berlin on Friday. Photo: DPA

The visit comes at a sensitive time as China grapples with Hong Kong's pro-democracy protests while the host nation gears up to celebrate a quarter-century since the fall of the Berlin Wall ended communism in East Germany.

But Berlin and Beijing, in a year of high-frequency diplomacy, stress they want to boost their multi-billion-dollar trade and investment ties and deepen a new "innovation partnership".
Merkel and President Joachim Gauck rolled out the red carpet and received Li, joined by his entire cabinet and an entourage of 130 business chiefs, with full military honours.

Both sides then held a joint government meeting, a format that is rare for Germany and unique for China.
Li's 14 ministers met 12 German counterparts to discuss cooperation in fields ranging from climate change and agriculture to using German green-tech to manage China's breakneck economic growth.
Both sides planned to sign some 30 cooperation and investment deals worth over €2 billion in sectors including health, education and the environment.

European aviation giant Airbus said it would ink an agreement, and Deutsche Telekom announced a joint venture with China Mobile to build a digital network for cars on Chinese roads.

Li's second Europe trip this year, which will also take him to Russia and Italy, started on the day street protests looked likely to flare again in Hong Kong, the former British colony that was returned to the Chinese mainland in 1997.
Crunch negotiations slated for Friday were called off by the Beijing-backed city officials, leading students to ratchet up their protests.
Hong Kong's 17-year-old student leader Joshua Wong asked Merkel for support, telling Germany's Bild daily that "only when Germany, Europe and the whole world put pressure on China and show solidarity with us will our protests have a chance".

Merkel, who grew up under communism in East Germany, touched on the issue of democracy in July when she told Beijing students that the 1989 fall of the Berlin Wall "enabled us to have a free dialogue".
In her latest weekly video message, Merkel stressed the importance of safeguarding civic freedoms in Hong Kong and criticized China's life jail term for a leading ethnic Uighur activist.
Chinese senior diplomats told a pre-trip briefing that Beijing is ready for human rights dialogue on the basis of mutual respect but stressed that "the question of Hong Kong is China's internal affair".

Of more immediate concern to corporate leaders at a separate Sino-German business summit were rules governing companies in China, the world's number two economy, with whom Germany had two-way trade worth €140 billion last year.
Investor concern has grown since Beijing has started cracking down on alleged malpractice by major firms. Last month it fined an affiliate of German carmaker Volkswagen more than $40.5 million for price-fixing.
Economy Minister Sigmar Gabriel told the business forum that Germany wants to be "a fair partner for Chinese investors" but that "German companies expect the same in China".
The head of the Asia-Pacific Committee of German Business, Hubert Lienhard, said "there is not yet equal treatment" for foreign companies in China, including the right to bid for public tenders and set up shop without a joint venture partner.
Sebastian Heilmann of Berlin's Mercator Institute for China Studies told AFP that for Germany remains China's "anchor country" in Europe, but that amid the disputes the "fair weather phase" is ending as China shifts from being a workshop for foreign companies to a competitor.
Li's Germany visit comes after Merkel in July travelled to China, her seventh official trip there, and after Chinese President Xi Jinping came to Berlin in March.
The Chinese premier will next travel on to Russia, which is engaged in a bitter standoff with the West over the Ukraine conflict, before meeting Western leaders at an Asia-Europe Meeting in Italy on October 16-17.
SEE ALSO: China orders German's execution for murders