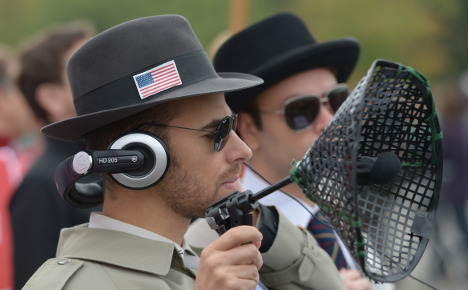 Demonstrators dressed as NSA spies outside the Bundestag in September

Sixty-seven percent of respondents to the survey by the John Stuart Mill Institute said that foreign spies were a threat when asked to pick from a multiple-choice list, the academics said in their annual "Freedom Index" published on Tuesday.

Close behind were private companies gathering personal information and passing it to the state or selling it to other businesses, both of which were voted for by 61 percent of people.

International terrorism came in fourth place, with 60 percent saying it was a danger to freedom.

And 73 percent of people said they did not trust private companies not to abuse their personal information, while 59 percent did not trust the state.

However, trust for private companies was stronger than trust in the state among young people, while the reverse was true of over-60s.

Germans were much stricter with others than with themselves about giving away personal data.

Fear of internet surveillance was greatest among those who use the internet regularly, the survey found, with 68 percent of daily users saying foreign intelligence agencies menaced their freedom.

But even 66 percent of those who never use the internet also feared the effect of foreign surveillance online.

The survey was conducted among 1,550 Germans.