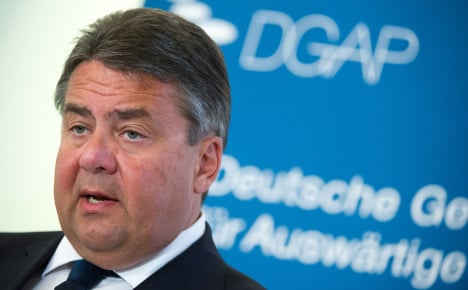 Although Gabriel promised stricter criteria for export licenses, he ruled out giving lawmakers in the German Parliament (Bundestag) a say over which weapons should be exported to which countries.

The need to tell the Bundestag and the public about every single export license the German government grants means decisions are already "consistent with our foreign and security policy,” he told his audience at the German Council on Foreign Relations.

And he suggested that responsibility for granting licenses could be transferred to the Foreign Ministry from the Ministry for the Economy starting from the next parliament.

But Gabriel did admit that Germany's need to send weapons to Kurds fighting Isis in northern Iraq was a consequence of excessive weapons exports to the Middle East.

Weapons from the West are now "in the hands of all kinds of warlords and terror groups,” he said.

Arms for the East

Government decisions to export weapons to the Middle East have come in for criticism from important voices within Gabriel's own Social Democratic Party (SPD).

His comments were a response to export licenses granted by Gabriel's Economy Ministry for Saudi Arabia and Qatar.

“Saudi Arabia is far from being an anchor of stability and Qatar is just as unsuitable as a partner in weapons deals,” he added.

Germany agreed to sell Dachs ('Badger') engineering tanks to Saudi Arabia and the United Arab Emirates and APCs to Qatar, and has also sold weapons to Algeria, Jordan, Kuwait and Oman.

The only weapons system Gabriel categorically ruled out exporting to the Middle East was Germany's Leopard II tank, widely recognized as one of the best in the world. Not as bad as France

Gabriel also called for closer European co-operation on weapons exports, saying that Germany had to try to convince fellow member states which are less scrupulous about their customers of German “foreign and security policy thinking.”

Other EU members like France had less strict rules about their manufacturers' customers, he said.

And he asked the German weapons industry to focus on democratic countries as potential customers and develop more products for civilian use.