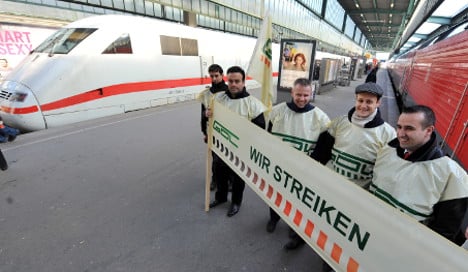 A GDL strike in 2011 at Stuttgart station. Photo: DPA

Strikes are now set to hit Deutsche Bahn, although no date for walk offs has been announced yet.

Members of the German Train Drivers' Union (GDL) who voted were 91 percent in favour of strikes, a union spokeswoman said in Frankfurt on Thursday.

Train drivers last walked out at the start of September for three hours in a warning strike. A short walkout was also staged on Monday September 1st which hit goods services and severely disrupted passenger trains.

But following the ballot on Thursday, the next round of walk outs will be full strikes.

A second strand in the dispute is Deutsche Bahn's demand that GDL sign a cooperation agreement with Deutsche Bahn’s in-house union EVG. The two unions are currently in conflict over which groups of personnel they should represent.

GDL said in September it had dismissed Deutsche Bahn’s latest offer because it did not resolve the conflict over which union should represent train drivers.